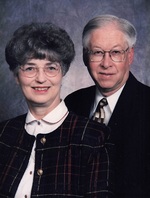 James (Jim) T. Tower, after an extended illness, entered his heavenley home on July 6, 2019 at the young age of 82 while a resident of Castlewood Senior Living in Nixa, MO. He was born to Dorothy and Tom Tower in Willow Springs, Mo. on July 16, 1936. Jim graduated from Willard High School in May, 1954. He attended Drury College and started his career in the banking industry. He worked in banking for more than 40 years. He retired from Ozark Bank as an Executive Vice President. Jim made several trips to Cuba in the 1950's. He made lifelong friends in Cuba in which he maintained contact with for over 50 years.
Jim married Sandra King on December 16, 1960. Jim and Sandra enjoyed traveling-taking trips to Nashville, Williamsburg and several cruises. Jim coached girls softball teams and won the Missouri State Championship in 1974. He played in the band The Travelers and again made lifelong friends. He enjoyed playing golf and collecting coins. Jim and Sandra were members of the South Haven Bptist Church.
Jim is survived by his wife, Sandra; his sister-in laws and brother-in-laws, Sharon (King) and Jack Reed of Bolivar, MO. and Sharon and Jim Caldwell of Springfield, MO. His nephews: Steve (Jo) Deer of Kimberling City, MO; Tom (Judy) Deer of Raymore, MO; Bill (Tamara) Day of Leawood KS; David Caldwell of Sedalia, MO; Michael Caldwell of Seattle, WA; 14 great nieces and nephews, five great great nieces and nephews and two great great great nieces. He leaves behind many wonderful friends. Jim was preceded in death by his parents, Dorothy (Woods) and Tom Tower; his sister and brother-in-law, Billie and Virgil Day; sister-in-law Carolyn (King) Caldwell and great nephew Joshua Deer.
Funeral services will be at 3:00 p.m. Wednesday, July 10, 2019, at Greenlawn Funeral Home North, 3506 North National, Springfield, MO. Burial will follow, in Greenlawn Memorial Gardens. Visitation will be from 1:00 p.m. to 3:00 p.m. before servies on Wednesday, at the funeral home.