To share your memory on the wall of Bobby Kenyon, sign in using one of the following options:

Provide comfort for the family of Bobby Kenyon with a meaningful gesture of sympathy.

Bob met the love of his life, Patsy Graham at Hollister High School and they were married in Harrison, Arkansas on May 18, 1954. They were blessed with two children, Teresa and Gene.

Bob was a member of the Hollister Church of Christ, serving as deacon for several years until his health started failing him. He was a lifelong resident of the area and had owned and operated the White River Skelly Station in Branson for several years. He had worked in the transportation department at The College of The Ozarks where he retired in 1997.

Funeral services will be held at 11:00 AM, Monday, September 23, 2019 at the Hollister Church of Christ with David Hamlin officiating. Burial will follow in the Flippin Cemetery in Flippin, Arkansas under the direction of Greenlawn Funeral Home in Branson.

Visitation will be held on Sunday, from 2:00 PM until 4:00 PM at Greenlawn Funeral Home in Branson.
Read Less

We encourage you to share your most beloved memories of Bobby here, so that the family and other loved ones can always see it. You can upload cherished photographs, or share your favorite stories, and can even comment on those shared by others.

Posted Sep 22, 2019 at 01:13pm
My fond memory of Bob is the story’s he could tell me of the way things were in the Hollister , Branson community before all the new roads , overpasses and shopping malls. When there wasn’t all the neon lights and Rhinestone and glitter. His story of raising a family and working hard is an honorable one , a simple man. Our son became part of his story when he married his granddaughter Chelsea. We are very fortunate and blessed to know and be a part of his family now. We are sorry for family’s and the community’s loss. A good man
Comment Share
Share via: 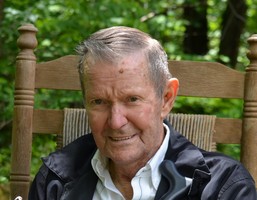