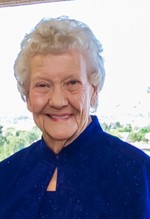 Lillian Marie Wright, 88, of Springfield, died Thursday, November 14, 2019 at Cox South Hospital in Springfield, Missouri. She was born February 26, 1931 in Ash Hill, Missouri, to William Marion and Cora May Saylors. She married Elmer Grant Wright on March 4, 1950.
She is survived by her son: Michael and his husband Robert, daughter: Susan Lettow and her husband Wolfgang; Daughter-in-laws: Georgiann Wright and Judy Dykes; Grandsons: Eric and his wife Carrie, Matthew and his wife Sara, Robert Jr. and his wife Sonia, grandson: Preston and granddaughter: Catherine Haslag and honorary granddaughter Angela Howard. She is also survived by great-grandchildren: Taisha, Kagen, Stephen, Emma, Jacob, Aaron, Wyatt, Makenzie and Mallory; great-great-grandson: Alucard and many cousins, nephews and nieces.
Lillian was preceded in death by husband of 39 years: Elmer as well as three sons: Thomas, William and Robert and one grand-daughter: Katherine. Her brothers Elic and James and sisters Luetta and Zetta also passed before her.
Lillian worked from the time she was very young picking cotton and helping her father load and unload firewood. Her first formal job was working in a laundry in Poplar Bluff, Missouri. After marriage she helped support her family by working as a waitress for many years at several Springfield restaurants. She also worked at Zenith where she met her best friend of 50 years Pauline Pulley. She worked as a security guard for Pinkertons at French’s as well as at Lily Tulip and worked in food service for Springfield School District. She continued to work into her early eighties as a product demonstrator at Walmart in Springfield.
Visitation will be held from 6:00 p.m. until 8:00 pm on Wednesday, November 20, 2019 at the Greenlawn North Funeral Home. The funeral service will also be at Greenlawn North. It will be Thursday, November 21 at 1:00 p.m. Burial at Greenlawn North Cemetery will follow the service.
The family requests that you consider a donation in Lillian’s name to National Kidney Foundation in lieu of flowers.