To share your memory on the wall of Knial Campbell, sign in using one of the following options:

Provide comfort for the family of Knial Campbell with a meaningful gesture of sympathy.

We encourage you to share your most beloved memories of Knial here, so that the family and other loved ones can always see it. You can upload cherished photographs, or share your favorite stories, and can even comment on those shared by others.

Thank you Susan & Chuck for honoring dad in this way. Praying wherever this tree is planted, it will bring smiles to many faces making heartfelt memories that last a lifetime--just as his life did for all of us. God bless you and your family.
GY

Posted Jan 20, 2020 at 02:21pm
THE YOUNG FAMILY WILL DEARLY MISS A CHERISHED FRIEND. HE WILL BE MISSED AT OUR WEEKLY FRIDAY NIGHT DINNERS WITH HIM AND THE BARTON FAMILY. ALSO HIS FANTASTIC SENSE OF HUMOR AT OUR SUMMER COOKOUTS. HE WILL ALWAYS BE IN OUR HEARTS AND THOUGHTS.
Comment Share
Share via:
BC

Posted Jan 19, 2020 at 04:06am
The BEST father-in-law a girl could ever want!! What an awesome job he did raising honorable sons... I was blessed to have known him, sad to see him suffer... and mostly blessed to know we will have forever together -- thanks to an awesome God & Savior.
I know until that day... I will think of dad often...and smile!!
Comment Share
Share via: 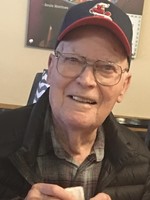