To share your memory on the wall of Betty Hundley, sign in using one of the following options:

Provide comfort for the family of Betty Hundley with a meaningful gesture of sympathy.

Betty and Bob spent over 40 years in Flint, Michigan where Betty retired from the General Motors Corporation administration after 30 years of service. She was an active member and Sunday School teacher at the Riverside Tabernacle (Assemblies of God) in Flint.

In 1990, Betty and Bob purchased their retirement home on the Current River in Van Buren, Missouri where they spent 14 years and enjoyed being members of the Van Buren United Methodist Church. Betty enjoyed cooking, baking, serving and visiting and known for her ‘chicken and dumplings and ice cream pie.’ In the fall of 2005, they moved to Maranatha Village in Springfield, Missouri, where she died on February 11th after a long battle with Alzheimer’s. Betty has been a resident of the nursing care facility for the last 15 months and served as the unofficial greeter that was constantly on the go. Everyone loved Betty.

We encourage you to share your most beloved memories of Betty here, so that the family and other loved ones can always see it. You can upload cherished photographs, or share your favorite stories, and can even comment on those shared by others.

Posted Feb 14, 2020 at 10:41pm
I knew Betty as a kind and generous woman and a wonderful Mother-In-Law, however briefly. Betty and her long-time husband, Bob were/are two of the finest people I have ever met in my life. My sincere condolences to Bob, Judith and to the rest of the extended family. I am truly sorry for your loss.
Comment Share
Share via:
MJ 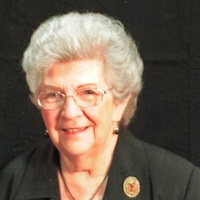