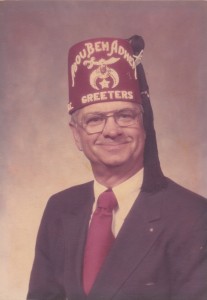 Albert “Al” Nolte, 93, Willard, passed away Tuesday, November 11, 2014, in Ash Grove Healthcare Center. Born June 11, 1921 in St. Louis to the late Albert W. and Mamie Nolte, graduated McKinley High School and married Lorraine Wells on April 13, 1946. He was a decorated WWII veteran with the Army Air Corp and retired from the Frisco Railroad after 46 years, being transferred to Springfield in 1964, and past loan officer of the (Frisco) Metro Credit Union. He was a member of the Willard Masonic Lodge, a 42 year member of the Abou Ben Adhem Shrine Greeter’s Unit, and a 50 year member of the Willard Lion’s Club. He was also a warehouse volunteer for Crosslines this past year. He is survived by his loving wife of 68 years, Lorraine, daughter; Denise Doucet, granddaughter; Bambie Wurzburger and husband Harv, four great-grandchildren; Stephen, Leanna, PJ, and Cale, one brother; Kenneth Nolte of Warrenton, one sister-in-law; Dorothy, and four nieces and nephews of St. Louis. In lieu of flowers the family requests donations to the Willard Presbyterian Church Building Fund or Shriner’s Children’s Hospitals. Visitation will be at Greenlawn Funeral Home North, Saturday, November 15, 2014 from 11:00-1:00pm. Funeral service will begin at 1:00pm. Graveside service with military honors will follow at White Chapel Memorial Gardens on West Division (Hwy. EE). Online condolences can be made at www.greenlawnfuneralhome.com.