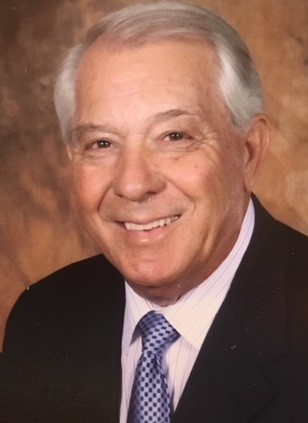 Alfred “Pete” Wilson, age 89, of Springfield, MO passed away May 3, 2019. He was born November 29, 1929 in Stratford, OK to Bennie “Frith” and Opal Wilson.
Pete is survived by his loving wife Marie of 64 years, son Mitch Wilson wife Debbie, daughter Phyllis Palmer husband Wade, daughter Janice Marie Tyndall husband Michael, grandchildren, Jennifer Marie Buchanan, Melissa Stieff, Chase Baker, Mackenzie Marie and Mikayla Palmer, Calder and Grant Tyndall, great grandchildren Selah Marie, Cana and Elim Buchanan, Knight Wilson Baker and Isla Baker and baby Stieff.
Pete retired from the U.S. Medical Center for Federal Prisoners in Springfield, MO and Coldwell Banker Realtors.
Visitation will be Friday, May 10, 2019 at 1:30 followed by the Funeral at 2:30 at Greenlawn Funeral Homes-East at 3540 E. Seminole, Springfield, MO 65809, with gravesite service follow at Greenlawn North Cemetery.
Pete was born in central Oklahoma and spent the first 10 years of his life on a small farm during the great depression. He had six brothers and sisters; Bennie, Winfred, Ruth, Laquita, Carl and Kay. Growing up, Pete picked cotton, delivered newspapers and had other jobs that kept him from attending school. After discharge from the Air Force Pete completed his GED and eventually graduated in 1980 from Drury University in Springfield, MO.
Pete enlisted in the U.S. Air Force in December of 1950 at the beginning of the Korean War. He trained as airborne radar specialist and served in Korea and Japan. While overseas he was assigned to a small flight test unit consisting of three specialists and five test pilots. Their responsibility was to test flight B-26 aircraft for repairs and maintenance, then the aircraft were released for combat duty over North Korea.
After his military discharge from the Air Force, Pete worked for the U.S. Federal Bureau of Prisons for 25 years at various jobs and locations. He retired from the U.S. Federal Bureau of Prisons as the Head Safety officer, in Springfield, MO. He worked for 3 years as a consultant for the Joint Commission on Accreditation for Corrections doing audits and evaluations for various state prisons throughout the U.S.
After retirement from the Federal Bureau of Prisons, Pete began a career in real estate. He was invited to join a group of million dollar producers in the real estate business to purchase the Coldwell Banker franchise for the Springfield area. He was affiliated with Coldwell Bankers for over 20 years.
Pete enjoyed thoroughbred horse racing and particularly liked to handicap the races. He also enjoyed white water rafting, river floating, fishing, golf and traveling. He was a member of the Heart of the Ozarks Sertoma Club and Fremont Hills Country Club. He enjoyed many years of fun and pleasure with members of both organizations.
Pete had a number of expressions that he repeated on numerous occasions. One of those expressions was “he bit the big greenie weenie”. He would say this when a team lost a game or something was worn out or broken. So it seems appropriate to say that Pete has finally bit the big greenie weenie!
Pete will be missed by all who knew him.
In lieu of flowers contributions may be made to hotosertoma.org, helpgivehope.org or osteam.org