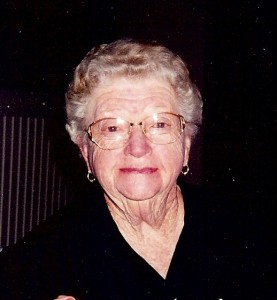 Aline B. Davis Torbett, age 95, of Bolivar, Missouri went to meet her heavenly father on Friday, March 27, 2015 at Citizens Memorial Hospital Bolivar, Missouri. She was born on October 24, 1919, in Polk County, Missouri, to Otis and Dessie (Smith) Painter. Aline was a spunky lady that lived a very busy and full life. . . she was a lady of her word that never hesitated to let you know her opinion or how she felt about you . . . you never had to wonder, you knew whether she liked you or not! Her daddy would often call her by her nickname Red to get her attention or if she was in trouble. Even though Aline was a no nonsense kind of lady, she loved to serve her community and spend time with her family and friends.

Aline was a head-strong independent woman of her time. In the mid-1950’s she sold Stanley products. She would load up David Russell, Jimmy, Gene and Patty in the car and be off to a party to sell the products. The kids would stay in the car and sleep; Davie would get the front seat, Gene the back seat, Jimmy and Patty the floorboard and they would share the hump in the middle as a pillow. A few years later Aline went to cosmetology school and then opened a beauty shop in her home for over 12 years. She had many ladies that would visit the shop on a weekly basis to have their hair put up into a “beehive”, the style of the time.

Aline had a huge heart for the little town where she lived. She was very instrumental in creating the Public Water System in Morrisville. Aline was a city board member and served as the city water collector for over 25 years. She was a fair water collector that followed the rules but, a “no excuse” kind of gal if you didn’t pay your water bill.

By the early 1970’s she and her husband David R. Davis wanted to serve the community of Morrisville even more by opening a restaurant named Panther Inn. This is where Aline blessed everyone that had a chance to eat one of her homemade fruit or cream pies. Patrons would often argue over who would get the last piece of pie each day. Along with the restaurant, Aline opened a ceramic shop where she had painting classes. Ladies from all over Polk county would come of an evening to paint all sorts of items.

As time went on and Morrisville grew, Aline along with others, saw a need for affordable housing. Aline helped write the original Federal grant that funded Grant Manor, a 16 unit rental community that still exists today in Morrisville. She continued to complete the Federal paperwork for the property many years after establishment.

Aline blessed and taught her family many valuable lessons. Some of the lessons were: Always stand up for yourself and stand your ground. If you fight or argue at the table, you get to do the dishes. Ironing is for everyone, even the boys. Most importantly, if you see someone catching a fish and you are not, just take their spot (not really, but she always did)!

Aline was a beautiful lady that never beat around the bush. She always told you how it was . . . good or bad and you never had to wonder what she was thinking. Aline will be remembered by her children as loving, but fair, by her grandchildren as loving and as a giver of wisdom, by her friends as compassionate, and by the community as a servant.

Funeral services will be held at 10:00 AM Wednesday, April 1, 2015, at Pitts Chapel with Reverend Randy Urich officiating. Burial will follow at Morrisville Cemetery, Morrisville, MO. Visitation will be held from 6:00 to 8:00 PM Tuesday, March 31, 2015, in funeral home. Online condolences may be made at: www.greenlawnfuneralhome.com. Memorial contributions may be made to the American Cancer Society, or the American Heart Association. Arrangements have been entrusted to Pitts Chapel Bolivar, MO.