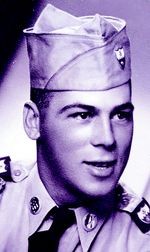 Alva Ester Ryan
Alva Ester Ryan, age 73, of Springfield, Mo., passed away Friday, August 14, 2009, in his home. He was born September 7, 1935, in Garfield, Ark., to Carl Ray and Mathilda (Schnitzer) Ryan. He was a longtime resident of Garfield, Ark., and graduated from Rogers, Ark. High School. Alva served in the United States Army from 1952 to 1955. He was employed by Goodyear Tire Company for 32 years. He was a member of Baptist Temple. His parents, Carl Ray Ryan and Mathilda Ryan preceded him in death. He is survived by his wife, Margery Ann Ryan of the home; son Fred Ray Ryan of Springfield; brothers, Jesse Ryan and wife, Connie of Westminster, Colo., and Gene Ryan and wife, Ann of Aurora, Mo.; sister Peggy Riggs and husband, Leon of Monett; granddaughters, Tiffanie White and husband, Matt of Willard, and Amanda Ryan; great-grandchildren, Matthew M. Kenzye R. and Ryen White. Graveside services will be held at 2 p.m. Tuesday, August 18, 2009, in Missouri Veteran’s Cemetery, with Rev. Mark Rounsville officiating. Visitation will be held Tuesday, August 18, from 12:30 to 1:30 p.m., in Greenlawn Funeral Home North. In lieu of flowers, memorial contributions may be made to Community Hospice, 1465 East Primrose, Springfield, MO 65804.