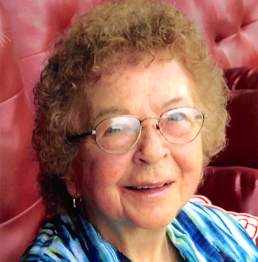 Anna Belle Goss Crosswhite was born on September 24, 1924 just north of Harrison, Arkansas. She was the youngest of Benjamin Jackson Goss and Janie Elizabeth (Daniels) Goss’ three children. Anna Belle’s paternal grandfather fought in the Civil War, and she was raised on the farm her father, who was born during the Civil War, homesteaded. After Anna Belle was orphaned at the age of 16, she moved to the Springfield area to live with her Aunt Cora and cousins. She graduated from Springfield High School (now Central High). When World War II broke out, she found work as a seamstress in a garment factory sewing uniforms for the Army.

Soon after Anna Belle met the love of her life, Kenneth Crosswhite, through friends at the Ozark Empire Fair. They married on June 6, 1945, and would go on to start the small farm where they would raise their children – Connie, Sheryl, Kenny, Tracy, and Mark. While Kenneth was training to work in the federal prison system in Washington DC, Anna Belle stayed behind to take care of the children and run the farm until he returned. Later in life Kenneth and Anna Belle worked as craftspeople at Silver Dollar City together, selling the knives he made and making many good friends. They traveled the country together, and would remain happily married until his passing in 2005.

Anna Belle’s faith was a cornerstone of her life and she was a charter member of Golden Avenue Baptist Church, which is celebrating 70 years of service. She was a strong supporter of the public schools, active in the PTA, PTA president, and an advocate for Central High when there was talk of it being closed. She went on to see all her children, some grandchildren, and even great-grandchildren attend there. She was a proud lifelong Democrat, continued to vote and follow current events. In her spare time she enjoyed sewing, doting on her beloved dogs Cleo and Joey, and baking the best biscuits and gravy you’ve ever had.

She is survived by her five children, 14 grandchildren, 15 great-grandchildren, and two great-great grandchildren. She was a kind, incredibly generous and fiercely independent soul who will be fondly remembered by all that were lucky enough to know her. A celebration of life memorial visitation will be announced at a later date.