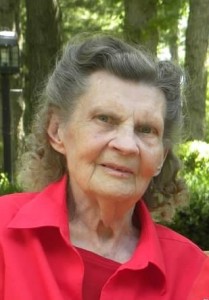 Anna Faye was born on January 30, 1930 in Corning Arkansas, the daughter of David L. Parish and Lura D. Satterfield. After graduating from Corning High School, she began to preach and evangelize, sharing God’s word. She teamed up with Wanda Wooldridge and for the next several years, they travelled throughout Missouri, Arkansas, Illinois and Tennessee, preaching the gospel in many churches. She became an ordained minister in 1951 with the newly formed United Pentecostal Church International (UPCI).
Anna Faye met Delmar Hall and they were married in 1955. They were blessed with three children, Vicky Hall, Durand “Randy” Hall and Nathaniel Hall. There are also two grandchildren and three great –grandchildren with another great-grandchild expected in 2015. They were married for 57 years.
Mrs. Hall died on Dec. 26th after a short illness. She is preceded in death by her parents and by her husband, who died in 2012.
Services will be at 10:00 A.M. Wednesday, December 31, 2014 at Greenlawn Funeral Home East in Springfield, Missouri with interment at Missouri Veterans Cemetery at Fort Leonard Wood at 2:00 P.M. Visitation will be from 5:00 to 8:00 P.M. Tuesday, December 30, 2014 in the funeral home.