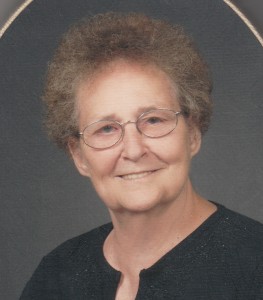 Anna Mae Fain, age 79, of Fair Grove, MO, passed away Monday, February 2, 2015 at Cox Medical Center South. She was born September 29, 1935, in Checotah, OK, to Fred and Dora (Hooper) Dornan. She met the love of her life Loyd Fain while in California, to this union six children were born.Anna loved to read and watch Jeopardy, her family knew not to call her at 5:00 p.m., because she would not answer the phone until Jeopardy was over. Her greatest love was her grandchildren and great-grandchildren.
She was preceded in death by her husband of thirty-five years,Loyd Fain; her parents, Fred W. and Dora Dornan; one brother, Damon Dornan; and two sisters, Edna Gilson and Naomi Breshears. She is survived by her six children, Loyd Dale Fain and wife Kathy, Alice Dornan and husband Martin, Robert Fain and wife Shirley, Jack Fain and wife Mary Jo, Cheryl Morris and husband Bruce, and Ward Fain and wife Elizabeth; sixteen grandchildren; numerous great-grandchildren; one brother, Haskell Dornan; and a host of family and friends.
Visitation will be held from 6-8 p.m. on Thursday, February 5, 2015 at Greenlawn Funeral Home North Funeral. Burial will be held at a later date in Hall Cemetery, Natural Dam, AR. Memorial contributions may be made to the Wounded Warrior Project. Services have been entrusted to Greenlawn Funeral Home North, Springfield, MO.