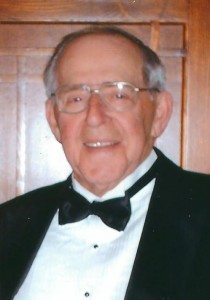 Archie Wallace Jones of Springfield, Missouri, passed away on June 20th, 2016 at the age of 85. He was born in Highland Park. Illinois on June 19th, 1931 to Archibald W. Jones and Minnie Strom Jones, and grew up in Lake Forest, Illinois. He was preceded in death by one brother and three sisters.
Archie graduated from Lake Forest College in 1953 and then signed a baseball contract with the Baltimore Orioles, and played professionally until 1956. In 1957 Archie was a player on the Lake Forest Recreation Team that won the Illinois State Baseball Championship and in 1959 as coach of the team won the 1959 Illinois State Baseball Championship. In 1984 Archie was elected to the Lake Forest College Athletic Hall of Fame.
Archie served on active duty in the U.S. Army for two years and then served as an officer for six years in the inactive reserves. He was a veteran of the Korean Conflict. Archie was employed as a Senior Financial Analyst, at Baxter International until his retirement.
In 1991 Archie moved to Ozark, Missouri. He was baptized at the Victory Baptist Church of Ozark; later becoming a member of Second Baptist Church in Springfield Missouri. He enjoyed singing in the adult and senior choirs.
In 2001 Archie met and married Virginia L. McNeely and both became active in short term mission work, both internationally and within the United States. He was also active in volunteer work having served at Victory Mission, Grand Oak Mission, and Cox South Hospital. Archie was instrumental in forming the Korean War Veterans Association in Springfield.
Archie is survived by his dear wife Virginia of the home, his daughters Diane Shield and husband Mike and daughter Lauri Preder, and grandson Christopher Box of Waukegan. Illinois. Also surviving, are 3 step children, Valerie (Mike) Stanton, Maureen Dodson and Jerry McNeely, 6 step grandchildren and 9 step great grandchildren.
Funeral Services will be held and Second Baptist Church, Springfield, Missouri on Thursday June 23rd, 2016 at 11am. Visitation will be on Thursday at 10 am at the church before the service. Interment will be at the National Veterans Cemetery, Springfield, Missouri at 2 P.M.
Memorial donations for Missions can be made to Second Baptist Church, 3111 E. Battlefield Road, Springfield, Missouri 65804 of Grand Oak Mission 2854 W. Grand St. Springfield, Missouri 65802