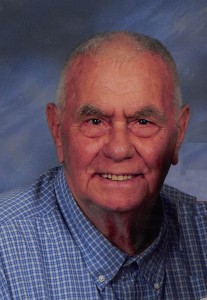 Arthur Lewis Thompson, born September 20, 1927 in Clifton, Kansas to the parents of Lemuel Thompson and Edna McDonald. He had 2 brothers and 2 sisters. The family moved from Kansas to Willow Springs, Missouri, where they lived until Arthur completed the 7th grade in school. They moved back to Salina, Kansas but Arthur never went back to school.
Arthur joined the United State Navy at the age of 17, and served on the battleship, U.S.S. New Jersey, during WWII.
After returning home from the Navy, Arthur met and married Geneva Maxine Broley, November 30, 1946. This year would have marked 70 years of marriage. There were four children born to this marriage. Edward, Sharon, Terry and Mary. Arthur and Geneva have 11 grandchildren and 16 great grandchildren.
Arthur was a plaster by trade and left his mark on many buildings in Springfield and Branson.
Arthur loved his family and spending time on Bull Shoals Lake at Lazy Acres Resort.
Arthur was a member of Macedonia Baptist Church for 55 years and served as a deacon for a time.
Arthur is survived by his wife, Geneva Thompson. Son, Edward Thompson (Patti), son, Terry Thompson (Vickie), and daughter Mary Atchison (Rod). He is also survived by a brother Donald Thompson (Shirley).
Arthur is preceded in death by his daughter Sharon Thompson Miller. Father and mother, Lemuel and Edna Thompson. Brother Clarence Thompson, and sisters Dolores Johnson and Lora Bradford.
Services will be on Monday, July 18, 2016 at 11:30 a.m. in Greenlawn Funeral Home South, with inurnment following in Missouri Veterans Cemetery at 1:00 p.m.