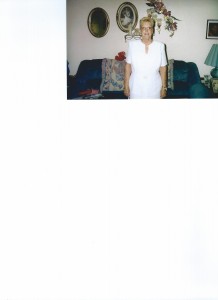 Funeral services for Arvilla Marie Michel age 79 of Halltown, Missouri formerly of Branson will be held at 11:00 AM, Saturday, September 12, 2015 at Greenlawn Funeral Home in Branson. Private burial will follow in the Mountain Grove Cemetery near Branson.
She passed away on September 7, 2015 at the Wilson Creek Nursing Home in Springfield, Missouri.
She was born on December 25, 1935 at Spokane, Missouri the daughter of Charles Marion “Chig” and Lula Belle Stewart Patrick. She was a 1953 graduate of the Galena High School, she attended New Life Temple in Hollister, Missouri and was a bus driver for the Branson School System for over nine years before her retirement.
Survivors include her husband Richard Michel of the home in Halltown, six children; Debra Carol Johnson of Springfield, Missouri, Susan Elaine Odom (Jon) of Springfield, Missouri, Julie Ann Weeks of Forsyth, Missouri, David Charles Cummings (Lori) of Georgia, Douglas Scott Cummings (Sharna) of Halltown, Missouri and Chuck Michel of Springfield, Mo. Two sisters, Emma Mae Eutsler (John) Shirley Ann Mullen both of Nixa, Missouri. Twenty-three grandchildren, 34 great grandchildren and two great great grandchildren. She was preceded in death by her parents, one brother, Sanford Lee Patrick and one sister, Diana June Patrick.
Visitation will be from 6:00 until 8:00 PM, Friday at the funeral home.
Memorial contributions in her memory are suggested to the Alzheimers Foundations.