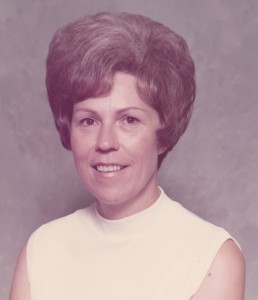 Audrey Bernice “Bonnie” Kirkey, age 82, born February 7, 1933 went to her heavenly home on August 30, 2015. She was surrounded by her family. She passed away peacefully in her sleep in Springfield, Missouri. Bonnie was born to John and Eva McLaughlin and spent her early life in Texas with her siblings James, Mitchell, Dean, and Kenneth. She moved to Missouri after meeting her husband, Billy Gene Kirkey. Together they raised their children Robert Sheffield, Barbara Smith, Billy Kirkey Jr., and Brenda Yarnell.
Bonnie is preceded in death by her husband Billy Kirkey Sr., her son Robert Sheffield, and daughter Barbara Smith. She is survived by Two children, Billy Kirkey Jr. and his wife Janet their children Katie, Rachel, Billy and Grant; Brenda Yarnell and her husband Van their children Cassie, Chelsea and Carlie; her son in law John Smith, his children Clint and Jacob; her granddaughter Destiney, her husband Tommy, and their children Marissa, Dezirae, Jessyka, Jordahn, Dakota, and Leevy; Grandsons Bobby and Noel.
Bonnie is also survived by many nieces, nephews, family and friends who all love her very much.
The visitation will be held at Greenlawn North Funeral Home on Thursday, September 3rd from 6pm until 8pm and the funeral will be in the same location on Friday, September 4th at 1:30pm. Interment will follow at the Missouri State Veterans Cemetery at 5201 S. Southwood Road. In lieu of flowers, the family is asking that a donation be made to one of the following charitable organizations: American Cancer Society, Intrepid Hospice, Wounded Warrior Project, or the Gary Sinise Foundation.