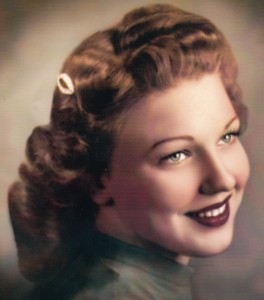 Bonnie, as she was known to her family and friends, went home to her Heavenly Father December 26, 2015, at the age of 85. She was ready to see Jesus, but patiently held on until all of her family arrived for Christmas. She died peacefully in her home surrounded by her loving family.
Bonnie was born March 3, 1930 to Hattie and Gustav Roepke of Strafford, Mo. She was the youngest of 11 children. Bonnie is survived by her husband, Donald L. Coble and four children: Debra Edwards (Jim), David Rothermel (Carol), Kirk Rothermel (Monet), Kim Swain (Max), four step-children: Don Coble Jr. (Louise), Russell Coble (Rhonda), Tom Coble (Amanda), and Steve Coble. She is also survived by 17grandchildren, 18 great-grandchildren, and one brother, Ray Roepke. Bonnie is preceded in death by her grand-daughter, Brooke Nicole Hyman and grandson, Elijah Cole Swain.
Bonnie was a lifetime active member of East Avenue Baptist Church where she sang in the choir and a trio. The last 22 years, she has been a member of Jefferson Avenue Baptist Church. Bonnie enjoyed cooking and sewing and made most of her children’s school clothes. Bonnie was so very proud of all her children and grandchildren.
Funeral services will be Wednesday, December 30, 2015 at 1:00 p.m. in Greenlawn Funeral Home North. Burial will follow in Greenlawn Memorial Gardens. Visitation will be Tuesday evening from 6 to 8 p.m. in the funeral home. Memorial donations may be made to the Parkinson’s Group or to the American Diabetes Association of the Ozarks.