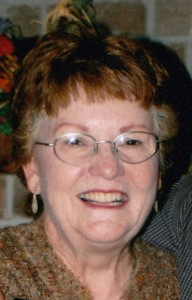 Barbara Ann (Hamby) Lumley went home to her lord at the age of 73 on Saturday, May 16th at home surrounded by her family after a long battle with Parkinson’s. She was born February 12, 1942 in Pueblo, Colorado. The daughter of John Wesley and Hester (Cudworth) Hamby. After living in Colorado for a while her family moved to Ava, Missouri then moving on to Springfield, Missouri where Barbara graduated from Parkview High School in 1960. She was a long time member at Jefferson Avenue Baptist Church. Barbara enjoyed spending time at the lake with her family and friends for many years, watching her two boys playing sports her weekend trips with her sister Diana and when she was not taking her boys to practice or ball games she loved to read, crochet her many table cloths and end table coverings. She joined the work force at Bass Pro after her youngest son graduated high school where she worked and made many close friends until she retired in 2004. She was preceded in death by her husband of 49 years Gary, her father and mother John Wesley and Hester (Cudworth) Hamby, 2 brothers Jim and Jerry,2 sisters Anita and Lenora and 1 niece Sheri and 2 nephews John and Bo. She is survived by sons Gary (Deana) and Eric (Jennifer), grandsons Seth (Shevelle) Lumley and Shane (Cassie) Lumley and Sister Diana (Carl) King. Great grandkids William, Sophia, Vann, Wyatt and Jillian, Tara (Adam) Ellis and great step grandchildren Shelby and Evan, 1 sister-in-law Jane Potter, nieces Nichole, Lori, Dee Dee and nephews Brian King, Brian Jones, Greg, Danny and Wesley. We would like to say thank you to Regional Hospice and Becky at Phoenix Home Health for their wonderful care of Barbara.
Graveside services for Barbara will be at 10:00 A.M. Wednesday, May 20, 2015 at Greenlawn Memorial Gardens. Visitation will be from 6:00 to 8:00 P.M. Tuesday, May 19, 2015 at Greenlawn Funeral Home North.