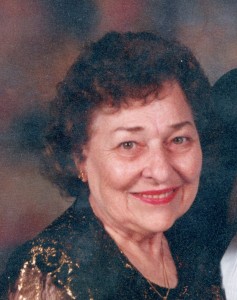 Mrs. Barbara Jean Stark Vorhees, age 91, went to her final resting place with her lord on May 11, 2015, at her home in Springfield. She was born on August 11, 1923 to Hugh Carlin and Willa Odessa Clopton Stark in Kansas City, Missouri. Barbara was a graduate of Excelsior Springs High School, class of 1941. She exceled in music, playing her beloved oboe, and was honored by selection to perform in concert in symphony at Kansas City. After high school, Barbara attended Kansas City Business College. She worked on “Film Row” for Fox Midwest and Warner Brothers for eight years before joining American Hospital Supply Corporation as executive secretary to the manager. It was there that she met her future husband and five years later they were happily wed, a life they led for over 50 years. Barbara was a caring wife and mother who pledged herself to her family. Vacation pleasure for Barbara was cruising the Caribbean Sea, and she enjoyed many trips to her favorite ports of call.
Barbara was preceded in death by her parents and her sisters, June Young, Winifred Martin, and Joan Wood. She is survived by her devoted husband, John Vorhees; her daughter, Kristen Squires and husband Ronald; two grandsons, Michael and Andrew; her brother, Hugh Stark; and numerous nieces and nephews.
Visitation will be at Greenlawn Funeral Home South on May 14, 2015 beginning at 10:30 a.m. with services to follow. In Lieu of flowers, memorial contributes may be made to the Joplin Valley Scottish Rite “Care For Kids”, 505 south Byers, Joplin, MO 64801. Barbara’s family wishes to express their deep, heartfelt appreciation to the Mercy Hospice staff for their tender thoughtfulness during their care for Barbara.