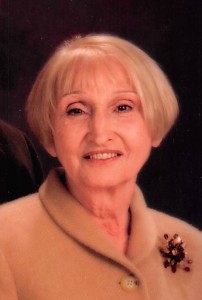 Services For Barbara S. Jones will be at 11:00 A.M. Thursday, August 13, 2015 at Greenlawn Funeral Home East. Burial will be at Rivermonte Cemetery following the service. Visitation will be from 6:00 to 8:00 P.M. Wednes
Barbara S. Jones (Smith) 83 Springfield Mo. Entered her eternal home Aug.9 2015. Barb was born to Elmer and Ruth (Glenn) Smith Jan. 2,1932 in Dade Co. Mo. And was preceded in death by her parents, and sisters Joyce Eicher and Patricia Smith. As well as bro- in-laws Al Karr and Glen Eicher. She is survived by husband Byron .sisters, Dixie Karr Riverside Mo. nephew Jeff and Cathleen. Freda and Darrell Earhart PA. and sons Doug and Stuart, and sister- in- law Carlene and Lewis Sexton along with many nieces and nephews whom she loved.
Barbara married her forever love Byron in 1952, and this past year celebrated 62 years. In 1958 she graduated from SMS with a Bachelors in Elementary Ed and taught in several Mo. schools one being a one room school house. Barbara spent several years raising son Brad and later returned to work as a top Sales Associate at Dillards , from which she later retired.
Barb was a member of several churches throughout her life and currently a member of Second Baptist. Her faith and love for The Lord was evident by her positive attitude and encouragement to her family and friends One of her greatest joys was her son Brad, wife Tammy of Springfield along with two grandsons (who fondly called her Barbie)Brady of Springfield and Baker, Vail Co.
Barbara stated in her last days that she had so many wonderful friends and that was evident by the support of kind words, prayers, and visits she received. Barbara’s passion was helping others, donations can be made to Victory Mission in her memory.

Services for Barbara will be at 11:00 A.M. Thursday, August 13, 2015 at Greenlawn Funeral Home East with burial to follow at Rivermonte Cemetery. Visitation will be from 6:00 to 8:00 P.M. Wednesday in the funeral home.