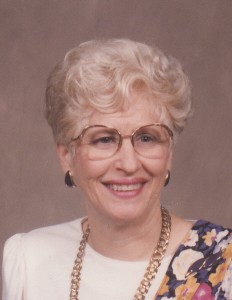 Bette Holmes of Springfield, MO entered her eternal home with Jesus on Monday, July 20, 2015 at Magnolia Square nursing home. The daughter of Jesse and America Shands, she was born in Caruthersville, MO on September 18, 1932. She was united in marriage on July 25,1955 and they had two sons, Mark and Mike. For over thirty years Bette taught public school, primarily third grade and retired from Willard Elementary. She loved her third graders and felt strongly that it was her life calling to teach. Bette partnered with her husband helping him as he pastored local area churches for fifty years. She taught women and couple’s Bible classes, spoke at women’s retreats and other church functions. Bette loved her family deeply and she had a contagious zest and enthusiasm for life. Her encouraging words and witness for Christ impacted many people. As one person said, If there was ever a Godly woman Bette was the epitome.
Her husband Rev. U. John Holmes, her parents and one brother, Bob Shands, preceded Bette in death. She is survived by son Mark Holmes and his wife Jeanna of Springfield and their children, daughter Jaclyn Boatright and her husband Matt, of Ozark, and their two sons, Brody and Peyton; and son Rev. Jonathan Holmes and his wife Amber of Norman, OK and their daughter Quinn; and son Mike Holmes and his wife Sue of Florissant, CO; and sisters Wanda Gallagher of Denver, CO and Cathy Estraca; sister-in-laws Eula Holmes of Chestnutridge, MO and Fern Shands of Hattiesburg, MS; several nephews and nieces; and a dear cousin Barbara Perdzock of Jonesboro, AR. Visitation will be Friday, July 24, 2015 at 10:00 am, with the funeral service immediately following at 11:00 am at Greenlawn Funeral Home North. Burial will follow in Greenlawn Memorial Gardens.