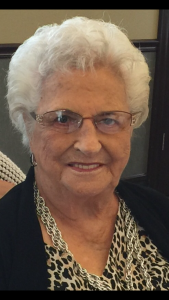 Betty Jean (Ott) Brooks Morgan, born October 4th, 1925 in Fordland, MO passed away Friday September 2, 2016 at Glendale Gardens Nursing and Rehab Center. She was born to John George Ott and Minnie Idella (Johnson) Ott.
After graduating from Fordland High School in 1943, she rode a train to Springfield, MO and started working for Brooks Potato Chip Company where she met and married Lonnie Jean Brooks (deceased). They had four children together. She later married John (Bud) Morgan in April, 1972 and moved to Indianapolis, IN. When Bud retired from Roadway Trucking Company in 1979 they moved back to the Ozarks.
She is survived by her children Linda Lee( Brooks) Edmonds (Bob Edmonds) of Branson, MO, Larry Joe Brooks (Cindi Brooks) of Highlandville, MO and Tammy Jo (Brooks) Luce (Keith Luce) of Springfield, MO. Grandchildren; Pamela (Mason) Bachus (Randy), Patricia Mason, Lori (Edmonds) Williams (Bush); Steve Edmonds (Susan); Sherry Edmonds; Casey Brooks (Danielle), Cory Brooks, Brandon Buckle (Jessica), and Bradley Buckle (Meschiel). Betty also was blessed with 18 great-grandchildren (known by them as “GG”), 4 great-great grandchildren and many nieces and nephews.
She was preceded in death by her parents, her son Loyd Jay Brooks, her husband John (Bud) Morgan, her siblings Thelma (Ott) Lea, Georgia (Ott) Nash, Warren Russell Ott and her niece Helen (Lea) Watts.
Betty loved working. Some of her favorite places she worked over the years were The Depot Tavern, The Grove Supper Club, The Lamplighter Inn, The Black Steer Room, The Locker Room, Brigance Show-Me Shores on Table Rock Lake, Hepper’s Flea Market and Edmonds Dental Prosthetics (where she was known to all as “Grandma Betty”).
The family would like to thank the staff of Glendale Gardens, The Maples, Integrity Home Care, The Waterford and a very special thank you to Robin Snuffer and Judy Kiefer.
Memorial Services will be held on Saturday, September 17th at Green Lawn Funeral Home North, 3506 N. National, Springfield, MO.
Visitation will be at 10:00 a.m. with service following at 11:00 a.m.
In lieu of flowers, memorial donations may be made to American Heart Association or
Fordland Cemetery, c/o Vanessa Owens, 4282 N. Hope Road, Fordland, MO