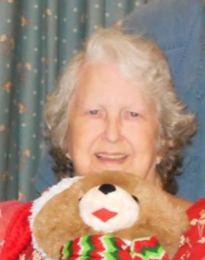 A Memorial Service for Betty J. Shelton age 85 of Branson, Missouri will be held at 2:00 PM, Saturday, February 1, 2020 at Greenlawn Funeral Home in Branson.

She passed away on January 28, 2020 at the Forsyth Nursing and Rehab.

Betty was born on October 28, 1934 in Hattieville, Arkansas the daughter of John Richard and Ada Duvall Crites. She had been a longtime resident of the Branson area. She was a homemaker, and enjoyed, garage sales, sewing, doing puzzles and camping.

Survivors are her two children; Bennie Wayne Shelton (Cynthia) of Forsyth, Missouri and Debbie Roberts of Siloam Springs, Arkansas. Two brothers; Harlen Crites and J. H. Crites both of Malvern, Arkansas. Two grandchildren and two great grandchildren. She was preceded in death by her parents, her husband, Johnny Shelton and seven brothers and sisters.