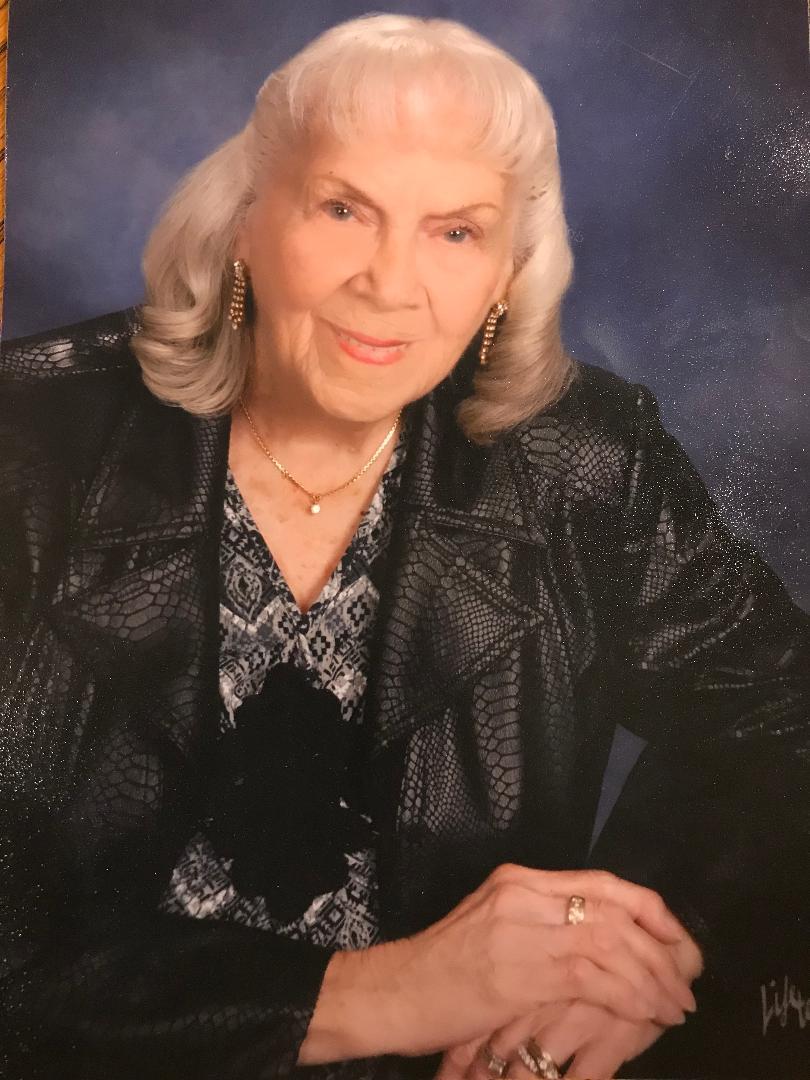 Betty Jo Tate was born on April 21, 1926, in Sparta, MO, as Betty Jo Fly the daughter of Elsie Adams Fly and Fred William Fly. Betty attended school in the Springfield area where she graduated from Pleasant Hope. She was converted at age 7 at the Temple Tabernacle Baptist Church in Springfield, MO, and baptized into Robberson Prairie Baptist Church North of Springfield, MO, at the age of 10. She was a strong Christian woman with a loving, service-oriented heart. Over her lifetime, she had been a member of Sterling Acres Baptist Church, Immanuel Baptist Church, River Boulevard Baptist Church, and Susquehanna Baptist Church in the Kansas City, MO, area and First Baptist Church in Bolivar, MO. She was always very active in the church women’s groups and the music departments, and she rarely ever missed a Sunday in church.
Betty’s family was a musical family with a rich history. She played the guitar and the piano, and sang in a group with her mother and father, her brother, Bill, and her sister, Patty, as the Fly Family. They performed at various political rallies, schools, parks, revivals, and theaters. Betty was the yodeler and sang Yellow Rose of Texas and Cowboy’s Sweetheart. During WWII, Betty traveled to Fort Bragg to spend some time with her brother, Cotton. She stayed with the family of Louise Tolar singing duets with her on a radio show called the Village Barn Dance starring Ad Booie. In June 1945, the family traveled East of the Mississippi with an accordion and a guitar to Mount Vernon where they were welcomed by Lonnie Glossen and appeared on the very popular Renfro Valley Barn Dance and were hired as “Betty and Pat”. They spent the summer there performing and appearing in other programs besides their own.
Betty returned to Missouri and married Lee A. (Bob) Hampton in 1946 in Brighton, MO, after he returned from his service in WWII. She had worn his wings while he was away. Betty and Bob joined Patty and others later, broadcasting a daily radio program over the armed forces network called the Ozark Mountain Jubilee.
They moved to the Kansas City area and started their family. They had three children, Patricia, Anita and Rob. Betty was a wonderful wife, mother, grandmother, and aunt that made her children’s clothes, attended all of their games, concerts, performances and special events. She was also a den mother and a girl scout leader.
Betty was an accomplished musician, artist, and seamstress. She found interest in oil painting in the ‘70’s and has since produced countless beautiful works of art. She also had a special love for Western and Hallmark movies, Gunsmoke and the Kansas City Royals. She never missed a game.
Betty’s first husband passed away in 1996 and she moved back to Southern Missouri where she met her late husband, Russell Tate, in Bolivar. They were married in 2005 and made their home there until he passed away in 2008.
Betty came back to Independence, MO, where she lived until her death on November 21, 2019, at age 93. She is preceded in death by her parents, her husbands, and four siblings, brothers Billy Fly, Cotton Fly and Dean Fly and sister Lotha Fly Nelson. She is survived by her sister, Patty Fly Peavey (Ralph) of Fair Play, MO, daughter Patricia Ramsey (Steve) of Blue Springs, MO, daughter Anita Jonas (John Riley) of Independence, MO, son Rob Hampton (Joell) of Independence, MO. She is also blessed with many grandchildren, great grandchildren, great great grandchildren and nieces and nephews.
Visitation will be held Friday, November 29, at Susquehanna Baptist Church, Independence, MO, at noon with services to follow at 1:00 pm at the church. Graveside services and burial will be Saturday, November 30, at Hickory Grove Cemetery, Humansville, MO, at 1:00 PM. Arrangements have been entrusted to Pitts Chapel Bolivar, MO