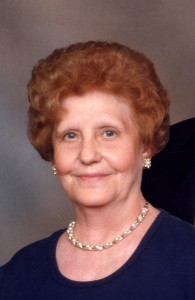 Funeral services for Betty Joe Wright age 84 of Hollister, Missouri will be held at 11:00 AM, Thursday, January 28, 2016 at the First Christian Church in Chanute, Kansas with Pastor Tom Eastman officiating. Burial will follow in the Thayer Cemetery in Thayer, Kansas under the direction of Greenlawn Funeral Home in Branson.
She passed away January 24, 2016 at her home in Hollister, Missouri.
She was born on October 3, 1931 in Arcadia, Kansas the daughter of Ora and Nellie Reynolds Simons. She had lived most of her life in the Kansas area in Fort Scott, Humboldt and Iola Kansas and had lived in Hollister, Missouri the past fifteen years. She was a homemaker most of her life and was of the protestant faith. Betty was united in marriage to Earnest Wright on May 28, 1950 in Eureka Springs, Kansas and to this union was born five children.
She is survived by her husband, Earnest Wright of the home in Hollister, Missouri. Five children; Linda Doyle (Joe) of Chesapeake, Virginia, Kathy Kelley (Dennis) Bennington, Kansas, Becky Julich (Larry Kerwin) of Forsyth, Missouri, Debbie Bockover (Lyle) of Olathe, Kansas and Ernie Wright (Donna) Chanute, Kansas. Four sisters, six grandchildren and 13 great grandchildren. She was preceded in death by her parents and six brothers and sisters.
Memorial contributions are suggested to the Hospice Compassus in Branson, Missouri or to the First Christian Church in Chanute, Kansas.