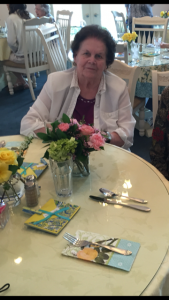 Funeral services for Beulah Mae Little age 80 of Branson, Missouri will be held at 11:00 AM, Saturday, December 5, 2015 at Greenlawn Funeral Home in Branson with Pastor Mike Keeter officiating. Burial will follow in Ozarks Memorial Cemetery in Branson.
She passed away on December 2, 2015 at Point Lookout Nursing & Rehab in Hollister, Missouri.
Beulah was born on October 16, 1935 in Sugar Loaf, Arkansas the daughter of Howard and Lydia Smith Linkous. She was a long time resident of the area, was a homemaker and was a graduate of Branson High School and was of the protestant faith.
She is survived by her daughter Teresa Keeter (Bill) of Branson, Mo. One brother Tom Linkous of Hollister, Missouri and one sister, Erma Blevins of Hollister, Missouri. Four grandchildren and three great grandchildren. She was preceded in death by her parents, husband Arvile Little, son Gary Little, a sister, Betty Jo Dimetroff and an infant grandson.
Visitation will be from 5:00 until 7:00 PM Friday at the funeral home.
In lieu of flowers memorials are suggested in her memory to Preferred Hospice of Missouri, 1567 W. Diane St. Suite B, Ozark, Mo. 65721.