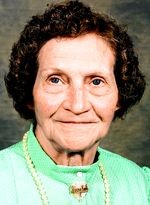 Beulah Oletha Herd, 95, of Springfield, formerly of Theodosia, daughter of Wesley and Leona Lee, passed away Wednesday, July 29, 2009, in The Maples at Primrose. She was born February 17, 1914, in Ozark County, Mo. Beulah was a homemaker. She was a member of East Side General Baptist Church. She was married to Ellis Freeman Herd, he preceded her in death. In addition to her husband, she was preceded in death by three brothers, Truman Lee, Rubin Lee and Joe Lee; and one infant grandson, David Lee Herd. She is survived by her sister, Alma Garrison; son Carl Herd and wife, Linda; grandchildren, Dennis Herd and wife, Nancy, and Carol Box and husband, Jason; great-grandchildren, Shane Herd, David Herd, James Box and Whitney Box; many nieces and nephews; and a host of relatives and friends. Funeral services will be held in Greenlawn Funeral Home South at 10 a.m. Monday, August 3, 2009. Burial will follow at 2 p.m. in Lutie Cemetery, Theodosia. Visitation will be from 2 to 4 p.m. Sunday, August 2, 2009, in the funeral home. Beulah suffered a moderate stroke on April 3, 2008. Since then she resided in Primrose Place Nursing Home. The family wishes to thank everyone who offered prayers, visits and other kindnesses. The family suggests memorial donations be made to Lutie Cemetery, PO Box 450, Theodosia, MO 65761.