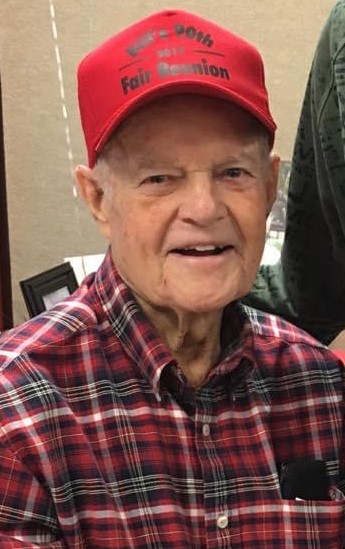 Bill D Fair, 92, of Springfield, was born Nov. 17, 1927, in Okemah, Oklahoma to Jessie Lee and Nellie Gray Crump Fair and went to be with the Lord at Webco Manor Nursing Home on Sept 22, 2020. He moved to Missouri in 1942 and attended High School in Conway, Missouri. He played on the Conway Basketball team and they won State. He dated the Love of his life, Ida Karen Rader. He was taking her to the school dance and the Rader creek was flooded, and he could not drive to her house. But that did not stop him from getting to her. He rolled his pants up and waded through the water and walked to her house. They didn’t make it to the dance, but he made it to his sweetheart. He was drafted by the United States Army in June 1951, and stationed at Camp Picket, Virginia as a Combat Engineer, and served until January 1953. Bill had ten days on leave, and found an apartment, bought a new 52 Ford from Conway Ford Dealership, and married the “Love of his life”, Ida Karen on May 23, 1952. They were married almost 62 years, until Ida Karen went to be with Jesus on March 8, 2014. Bill loved his “Sugar” as he always called her, and he was “Her Bill”. He was baptized and confirmed on December 28, 1952 at Immanuel Lutheran Church in Rader, Mo. His occupation was a machinist where he made brake drums for Reyco Manufacture for 36 years. But his true love was farming, gardening-especially his “Special Italian Tomatoes”, traveling, fishing, the Lady Bears, and St Louis Cardinals. Bill was met at Heaven’s gates by Jesus and his Ida Karen. He was preceded in death by his wife, parents, two brothers, Don and Tom Fair; two sisters, Jeane Sowder and Louetta Carter; two great grandbabies, Kamry Ann and William John, and many loved ones. Bill is survived by his son Ronnie Fair (Jacque), three daughters Pam Aleshire (John), Tammy Auman (DA), and Vicki Thompson (Billy); 10 grandchildren, Michael, Travis, Ashley, Jordan, Maggie, Jeremy, Brandi, Corey, Jeffrey and Jordan; 17 great grandchildren, Haley, Hayden, Ashlynn, Annabelle, Brailyn, Brinlee, Bodie, Parker, Taylor, Aldean, Kloey, Kaylee, Bree, Abrahm, Brighton, Kynzee, and Jaxx; sisters in laws, Corene and Carol (Pug), and very special friends Lizzie and Hendrix. He is also survived by countless family and friends. Bill was an active member of Trinity Lutheran Church in Springfield for over 60 years. One of his last requests before he went to Heaven, was to attend his church for one last time. He did get to attend Trinity this past July, he came home for a month to his house and made some wonderful memories with his family. The family treasures these special times in their hearts. The past six and a half years since his wife went to heaven, he has shared so many stories with his family, but most importantly his love of Jesus. The last two years while living at Webco nursing home, he shared his faith with his special granddaughter, Jordan, and her wonderful staff. The family appreciates all the love and care that was given to him every day. They would also like to thank the staff from Seasons Hospice, and all the prayers that have been lifted up for Bill and the family. Memorials have been set up for Seasons Hospice of Springfield and the pavilion fund at Immanuel Lutheran Church in Rader, Mo (97 Orchid Rd, Conway, Mo 65632).
Services for Bill D. Fair will be at 12:00 noon Saturday, October 3, 2020 at Greenlawn Funeral Home East. Visitation will be from 10:00 am to 12:00 pm prior to the service. Interment will be at Rader Cemetery near Conway, MO.