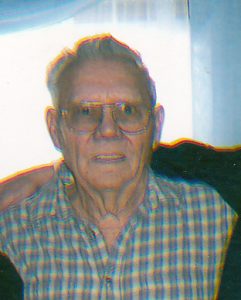 Billy (Bill) Chastain age 88 , Republic passed away Sunday, September 4th, 2016 at Cox Medical Center South .
He was born on Februay 9, 1928 in El Dorado, Kansas , he was the son of Irvin Chastain and Juanita (Park) Chastain . Bill worked for many years as a machinist. Bill was united in marriage to Hazel Long on July 1, 2005 in Springfield, Missouri. He loved to attend Pow Wows, travel, square dance, deer hunt and build things with his hands. He will always be remembered as a very patient and loving man.
Survivors include his wife, Hazel, of the home; four children, Terry Lee Chastain, Sharon Kay Chastain, Ronald Wayne Chastain, and Patricia Jo Alcorn; numerous grandchildren and great-grandchildren; two brothers, David Chastain and Burt Chastain; and a host of family and friends.
He was preceded in death my three wives, Imogene Turner, Bernice Chastain, and Elaine Chastain; one son Billy Chastain, Jr., two sisters; and five brothers.
The family will receive friends from 3:30 pm to 4:30 pm at Greenlawn Funeral Home North. Services will be held Friday, September 9th, 2016 at 4:30 pm in Greenlawn Funeral Home- North Springfield 3506 N. National Ave Springfield, Missouri 65803, with burial to follow at Fairview Cemetery in Augusta , Kansas. Memorial contributions may be made to the Billy Chastain Memorial Fund..