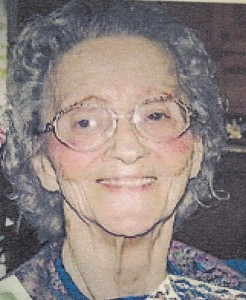 Blanche Alene Chapman, who just celebrated her 92nd birthday in Sparta, MO, went to be with our Lord after a 13 year battle with Alzheimer’s, of which a stroke took her life on April 6, 2015, at 7:35 p.m. Blanche was born March 22, 1923 in Pontiac, MO to James and Myrtle Wilbank Terry of Ozark County. Blanche worked at Calvert’s Garment Factory and later was head cook at Logan-Rogersville High School up to her retirement. Blanche was married to Earl Richard Chapman on June 29, 1940. To that union was born five children; Bobby, Mary, Mike, Rick and Shirley Chapman. Blanche is preceded in death by her twin brother Troy Terry, spouse Earl Richard Chapman, two sons; Bobby and Mike Chapman, one son-in-law, Junior Pilkinton, two sisters; Virginia Terry and Fay Terry Chapman, and two brothers-in-law; Ted Chapman and R.C. Chapman. Blanche is survived by three children; Mary and spouse Willie Maples, Rick and spouse Judy Chapman, and Shirley Pilkinton, all of Springfield, eight grandchildren; Jeffrey Maples and wife Debbie, Teresa Manning, Ronnie Maples and wife Chrissie, Donnie Maples and wife Shonna, Kimberly Luttrell and husband Doug, Randy Chapman and wife Crystal, Dewayne Pilkinton, Doug Pilkinton and wife Lisa, as well as three step-grandchildren; Bobby, Billy and Brad Adams; 16 great-grandchildren, and one great great-granddaughter; two sisters; Helen Arnall and spouse Don of Springfield, Donna Haskins and spouse Denzil of Marshfield, one brother, James “Sonny” Terry and spouse Pat of Osceola, sister-in-law Betty Chapman of Nixa, and one brother-in-law, Paul and spouse Rosie Chapman of Seattle, Washington, and numerous nieces and nephews, family and friends. Blanche was very much loved and cared for by Rosalie Watts Ebeck in her Little Bit of Country Care Facility for 11 years in Sparta, MO. Rosalie had expressed to Blanche’s family that Blanche was like a second mother to her. Blanche will be missed by many. Please join us in celebrating her life at Greenlawn Funeral Home North on Thursday, April 9, 2015, 6:00-8:00pm. Funeral service will be Friday, April 10, 2015, 10:00am, at Greenlawn North, with burial to follow at Holland Cemetery in Rogersville, MO.