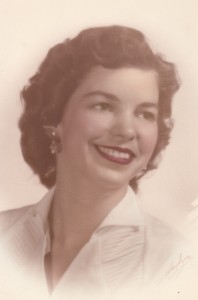 Bobbie Maurine McQuerter, 84, Willard, Mo, passed away on Sunday, March 22, 2015 after living a fulfilling life with the love of family and friends. Bobbie was born February 28, 1931, in Memphis, TN, the daughter of Lonnie Hendricks and Catholine Hendricks-Lester. Bobbie was the long-time City Clerk of Willard. She was a member of the Elks Lodge 409 and a member of the Eastern Star. Bobbie enjoyed being active. She liked watching the cooking channels, shopping, and her casino trips with friends and family. She attended Humes High School in Memphis, TN, and had great stories of her famous classmate, Elvis Presley. Her cashew chicken was a favorite request of family members. Bobbie was a strong, independent woman, as was evident by being a two-time cancer survivor. Bobbie was preceded in death by her parents and sister, Alice Jones, and two brothers, Harry Hendricks and Gene Hendricks, all of Memphis, TN. Bobbie loved her children and grandchildren dearly, attending many of their school and sporting events. She is survived by her son, David McQuerter of Bolivar, MO; daughter, Vicki R. Gomez and husband, Anthony of Springfield, MO; and son, Steven McQuerter of St. Louis, MO; and six grandchildren: Matt, Chris, and Jansen McQuerter; Olivia Betzold, Marissa and Evan Gomez. She is also survived by her sister, Evelyn Hendricks, of Memphis, TN, and brother, Vernon Hendricks of Abbeville, AL, as well as nieces and nephews and many friends. Memorial services will be held Thursday, March 26, 2015, at 3:00 P.M. in Greenlawn Funeral Home North, 3506 N. National, Springfield, MO. Bobbie will be missed by all who knew and loved her.