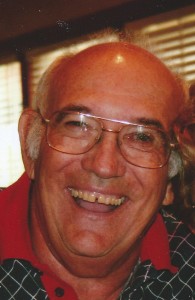 A Memorial visitation for Bobby Ray Moskop age 79 will be held from 6:00 until 8:00 PM, Thursday, February 25, 2016 at Greenlawn Funeral Home in Branson.
Bobby passed away on February 19, 2016 at home surrounded by his family.
He was born on October 22, 1936 to George and Jane Weldy Moskop in Carthage, Missouri.
After graduating from Carthage High School, he enlisted in the U.S. Army and served from January 1960 until March 1962. He was stationed at the Pentagon in Washington, D.C. He graduated from Missouri Southern College in Joplin, Missouri where he got a degree in music. Bob taught music for seven years. His first love was Southern Gospel Music right up there with crappie fishing. He was one of the founders and original piano man for the Foggy River Boys Quartet which started in Joplin, Missouri in 1968. They started out playing pie suppers, coon hunts, county fairs and PTA meeting in the Joplin area. The Foggy River Boys opened a show in a theatre in Kimberling City in 1972 and were there for three season and then started the fourth music show on the “strip” in Branson in 1974 until 1990. Prior to the Branson show, Bob taught high school music in Monett, Pierce City and Carl Junction and was student teacher at Riverton, Kansas under Dale Sullens who was the Riverton High School music teacher at the time. After retiring from the Foggy’s, Bobby & Marvy built Dogwood Lanes Bowling Center which they operated for twenty years.
Bobby is survived by his wife of 30 years, Marvy Moskop of the home in Branson. His daughter, Cara Huston and husband Randy and granddaughter Elizabeth of Rockaway Beach, Mo., sons, Daryl Moskop of Branson, Mo, and Chris Grantham and grandson Derek of Ozark, Mo. Brother-in-law, Mark Moses and wife Dena of Branson, and nieces Jessica Marvel and husband Joe and great nieces Natalie and Mariah of Poseyville, Indiana and Sami Turner of Branson. A sister, Peggy Koontz of Branson, Mo, and her tw0 daughters, Amy Goedeker and husband Joe and children John, Grace, Eli of St. Louis, Mo and Julie Richardson and husband Dale of Ash Grove and their children, Aaron of Kansas City, Hannah of Seattle, Washinton, Lydia of Ft. Bragg, N.C. and Mirian of Ash Grove.. A cousin, Jerry Weldy of Jasper, Mo whom he had a special bond and his little girlfriend Molly along with a host of other relatives and friends. He was preceded in death by his parents, parents-in-law Kenny and Carrolld Moses, brother-in-law Denzel Koontz, and best buddy Benji.
Chances are if Bob was not on stage he was fishing the streams of the Branson area and cooking up his famous “fried taters and crappie” on a creek bank camp fire.
In lieu of flowers, donations are to the family for a memorial to be determined later.