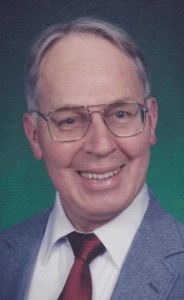 Bruce Veteto was born September 30, 1929, the youngest child of Arthur Jackson & Dora Frances (Austin) Veteto, in Mayfield, Kentucky. He passed from this life on October 28, 2014, in Springfield, Missouri. His parents, one brother, and four sisters preceded him in death.
Bruce attended Webb School in Bell Buckle, Tennessee. He credited 4 years of Latin at Webb for laying the foundation for his college years. He was 16 when he left home to enter Freed-Hardeman College in Henderson, Tennessee. When he finished there, he entered David Lipscomb College in Nashville.
When Bruce was 19, he moved to Rogersville, Missouri to become the first full-time preacher for the Rogersville Church of Christ. He became a “second son” to many families who welcomed him into their homes. There was always a bed and plateful of food ready for him, no matter how late the hour.
There he met his wife of 60 years, Mary Lou Moffis. They were married at Wheaton, MO on Oct. 10, 1954. Bruce was a full-time minister for 15 years, serving churches in Missouri, Kansas, and South Dakota. They had 2 children, Robin Elizabeth and Jefferson Bruce. Bruce is survived by his wife Mary, of the home, his daughter Robin and husband Kevin Wilkerson, and their children, Haley and husband Caleb Adams, Andrew Wilkerson, Taylor and husband John Plaster, and Benjamin Wilkerson; and son Jeff and wife Beth and their sons, Adam and wife Kristin, and Austin and wife Alanna.
Bruce was employed at Frisco Railroad, later Burlington-Northern, as a clerk. His complicated hot tea making ritual was legendary, to the fascination of his co-workers and the consternation of his bosses. Throughout his career at the railroad, Bruce remained in part-time ministry. An accomplished singer, he also led singing nearly 60 years.
After retirement from railroad work, Bruce embarked on a new adventure: He became a “drug pusher” for St. John’s Hospital. He pushed a large cart loaded with pharmaceuticals, and he amused many people with his Train Whistle that he would toot, warning folks around the corner to watch out for the oncoming cart.
Visitation will be held Thursday from 6 to 8 p.m. at Greenlawn East of Springfield, MO. Funeral services are slated for Friday at 2 p.m., also at Greenlawn East. Burial will be at Smith Cemetery, Rogersville, Missouri.