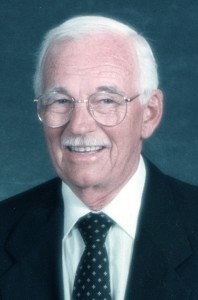 Buckley Blaine Van Hooser, Sr., 86, of Harrison AR. Passed away Saturday, July 9, 2016 at Hospice of the Hills in Harrison.
He was born February 16, 1930 in Dadeville, MO to Frank and Georgia Van Hooser.
After graduating from Dadeville High School in 1947 he worked for Frisco Railroad. Blaine join the United States Navy where he served during the Korean Conflict. After the service Blaine graduated from Drury College with a Double Master’s Degree in 1958. Afterwards he taught school for a few years and then became an Adjuster for Farmers Insurance Group from which he retired after 25 years. Blaine was a charter member of the Grand Lakes Sailing Club and was an avid golfer.
Blaine was preceded in death by his parents, his wife Shirley and his brother Richard.
He is survived by a 2 sons Buck and his wife Kathy and Craig all of Springfield, MO; 3 step-daughters Traci Phillips and husband Scott of Joplin, MO, Marla Phillips and husband O.J. and Cheryl Estes and husband Johnny all of Harrison, AR; a brother Allan and his wife Patty of Dadeville, MO; 8 grandchildren, Antoinette Martin, Carson Van Hooser, Reagan Armer, Johnathan Phillips, Misty Hawley, Cody Estes, Cory Estes and Dr. Ashley Merrick. He is also survived by 10 great grandchildren and 1 great great grandchild on the way and six nieces.
A memorial service will be at 11:30 A.M. Thursday, July 14, 2016 at Greenlawn Funeral Home East. Inurnment with full military honors will follow at Missouri Veterans Cemetery in Springfield. Visitation will be from 6:00 to 8:00 P.M. Wednesday, July 13, 2016 in the funeral home.