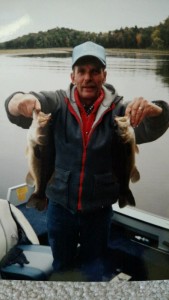 Calvin John Duit, 68, died Wednesday, Aug. 19, 2015, in Manor Care Center, Springfield, Mo., surrounded by his family.
Duit was born Oct. 15, 1946, in Hampton, Iowa, to Aielt and Wyona Duit. He grew up in Geneva and Iowa Falls area and graduated from Ackley-Geneva High School in 1965. He last lived in Ash Grove, Mo.
Duit worked at Ellsworth Community College for 15 years as a maintenance man. He also owned and ran C and C Traditional Archery. He enjoyed playing baseball and training horses as a young man and always had a passion for hunting and fishing. He also had a love for, and spending time with, his grandchildren.
He was preceded in death by his mother and father; one brother, Duane Duit; one sister, Carlene Harty; and one brother-in-law, James Harty.
Survivors include: One brother, Virgil Duit, wife Audrey; and sisters, Norma Burman, husband Keith; and Lavonna Meyer, husband Marlan; and one sister-in-law, Marge Duit, all of Iowa; four children and six grandchildren, Jeana Amundson of Clear Lake, Iowa, her two children, Jake and Taya; Chad Duit, wife Ali, and their children, Chase, Cora Jeanne and Alivia, of Bois D’Arc, Mo.; Lori Hemann, husband Jason, their son, Jaxon of North Liberty, Iowa; and Travis Duit, of Willard, Mo.
A memorial service for Duit is set for 3 p.m. Sunday, Sept. 13, at St. Peter’s United Church of Christ in Geneva, Iowa.