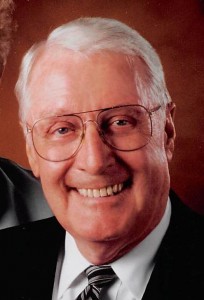 Carl Ervin Keiser, affectionately known as Kono, the eldest son of Carl and Sue (Garrison) Keiser departed life on June 2, 2015. Carl was intensely proud of his lineage, life, and successes which he often stated were the result of good family and great personal and business friends.
Carl is survived by three daughters, Constance S. Keiser of Springfield, Mo. and Vero Beach, Fl.; Karen Keiser Sizemore (Paul) of Clayton, Mo.; Carla Keiser Lobdell (Dan) of Strafford, Mo.; grandchildren Alexander and Claire Sizemore; brother Jerry Keiser (Marianne) of Shady Cove, Or. Another brother Robert (Bob) Keiser preceded him in death.
Carl’s life and presence in community and business enterprises was enhanced by his marriage and partnership of 58 years with Dolores Bumgarner Keiser who preceded him in death.
Carl and Dolores’ combination of love, pride and responsibility extended to three foreign exchange students, and several friends from Drury University. He was an honorary Kappa Delta Man at Alpha Psi chapter of Kappa Delta sorority where all the Keiser women are initiated members.
Born April 8,1930, Carl attended Boyd and Shady Dell elementary schools and graduated from Strafford High School. His education was furthered with
numerous business and technical schools.
Carl and Dolores’ business activities included founding Keiser Equipment Company, Inc., Total Marketing Services, Inc., Keiser Properties, LLC, and
completing the development of the Bumgarner real estate addition. They were also active in Strafford community events including Route 66 Days, fund raising for the Strafford Senior Center, helping the development of the Strafford Youth Center, and held various Strafford city positions. Carl was a board director of the Strafford Fire Protection District. They raised Brangus cattle, Komondor guard dogs, paint horses, and English Setter bird dogs.
In addition to family, Carl’s greatest accomplishments and pleasures were his valued relationship with his friends. Carl was an avid bird hunter and fisherman. He enjoyed sharing these activities with family, friends, and business associates.
His family thanks the numerous friends and families for their love, support, and prayers. Special appreciation to Alice Delcour for the friendship and adventures shared with Carl. Sincere appreciation to Dick and Jan Garrison for their loving care of Spec, Carl’s German Shorthair Pointer companion. Additional thanks and great appreciation to the many people devoted to his care. Special thanks to the Cox South 300 West staff and his doctors, Bergen, Robiolio, Bentley, Warren, and Milne.
Visitation will be held Thursday, June 11, 2015 from 6:00 to 8:00 pm at Greenlawn Funeral Home East, 3450 E. Seminole, Springfield, Mo. The celebration of Kono’s life will be held at 6:00 pm on Friday, June 12, 2015 at Greenlawn Funeral Home East with a reception following.
The family requests that in lieu of flowers, donations in remembrance of Kono be made to Alpha Psi Chapter of Kappa Delta Sorority, Drury University, 900 N Benton Ave., Springfield, Mo. 65802 for scholarships.
A private interment will be held at a later date in the Bumgarner-Keiser Cemetery in Strafford, Mo.