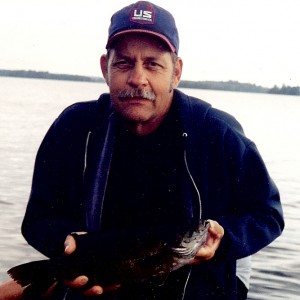 http:// Carl Henery Rotramel, age 64, of Bolivar, MO, passed away Friday, October 24, 2014, in his home. He was born March 1, 1950, in Humansville, MO, to Azel and Ethel (Russell) Rotramel. Carl attended Morrisville Schools from first through high school, and graduated in 1968. He was saved in 1963 at Enon Missionary Baptist Church. He was a member of the Campbell Grove Missionary Baptist Church.
Carl liked to work with his hands. He took pride in his work. Carl made many things from metal and wood. He worked as a HVac Technician for several years. He moved on to Architectural sheet metal. Carl worked in the Maintenance Department of Citizens Memorial Hospital for many years until his health caused him to take a long term disability leave.
Carl loved to fish and hunt. He loved to play music with his fiddle. Most of all he loved spending time with his grand and great grandchildren. He will be greatly missed by a host of friends and family.
He was preceded in death by his parents; his mother and father in-law Willus and Marjorie Hawkins; a daughter Shannon Rotramel Jacobson; and a infant grandson Jacob Rotramel.
He is survived by his wife Vicki Rotramel of the home; two sons: Allen Rotramel of Bolivar, MO, and Weldon Rotramel and wife Kristy of Brighton, MO; one brother Clyde Rotramel and wife Candy of Smithton, MO; 10 grandchildren: Anthony Rotramel and wife Taylor of Nixa, MO, Aaron Rotramel and fiance Ashlyn of Nixa, MO, Justin and Jeremy Rotramel of Brighton, MO, Jayce and Tristen Cole of the home, Erica Rotramel of Tulsa, OK, Rochelle Younger of Springfield, MO, and Allee Jacobson of Springfield, MO; five great grandchildern: Jacquelyn Rotramel, Jacob Rotramel, Kinsley Rotramel, Kennedy Rotramel, and Gabrial Younger; as well as a host of other relatives and friends.
Funeral services will be held at 10:00 AM Tuesday, October 28, 2014, at Pitts Chapel Bolivar, MO, with Bro. Kip Baker officiating. Burial will follow at Slagle Cemetery. Pall bears will be Allen, Weldon, Anthony, Aaron, Justin, Jeremy, and Clyde Rotramel, Jayce and Tristen Cole. Honorary pall bearers will be Larry Rotramel, Tom Hawkins, Sonny Glass, Bill Pool, Danny Hubbert, Lloyd Countryman, and Jason Carver. Visitation will be held Monday, October 27, 2014, from 6 to 8:00 PM in the funeral Home. Arrangements have been entrusted to Pitts Chapel Bolivar, MO.
http://www.tributeslides.com/tributes/show/9DNJJC2P8Y3PW7XS