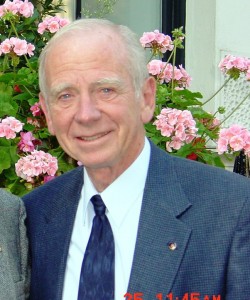 Charles was born December 4, 1925, in a small bungalow on St. Charles St., Joplin, Mo, spending most of his early years in Kansas City and northwest Arkansas, He had a love for travel, especially Western Europe. His principal work, however, was in Eastern Europe where the masses had been forcibly separated from their faith. Their response was more life changing.
Charles Fuller, a native of Missouri, passed away Saturday, October 11, 2014 at James River Care Center. Charles received his Juris Doctorate from the University of Missouri at Kansas City with post graduate studies at the University of Colorado and Harvard. He was of counsel with the local firm of Neale & Newman during the last decade of his career, He served on The Lighthouse Child Development board as well as three private foundations. He was currently serving as chairman of The Jeanette L. Musgrave Foundation and board member of the Roy W. Slusher Foundation and The Ethel Heuer Foundation.
As a youth, his studies were interrupted by the exigencies of WW II, where on enlistment he chose pilot’s training, but was later transferred into flight engineer training for the B-17 Flying Fortress, where he hoped to fly with the 8th Air Force in Europe. Just as that appeared to be a reality, a greater need developed in the Pacific theatre, where he was sent became a part of the Air Transport Command, moving high priority cargo and personnel from the states to various parts of the southwest Pacific. One of his greatest disappointments was the fact that he did not get to fly with the 8th Air Force.
Charles returned from the military to undertake his graduate work at the University of Kansas City, later to become the University of Missouri- Kansas City. He received his Juris Doctorate in 1951 and in 1953, he and his wife, Wilma Louise chose to make Springfield, Mo their home. They had three sons, Dr. Michael J. Fuller, of St. Louis, Mo., Mark S. Fuller, of Seattle, W A., and Eric C. Fuller, of Springfield, Mo.
He was one of the founding board members of the Burrell Center, Community Foundation of the Ozarks. He served on the board of a number of local civic and charitable organization, including two terms as president of The University Club. He was one of the nine founding directors of Business Mens Fellowship USA, serving as Vice President. He has previously served as an International Director’ for FGBMFI, under the leadership of its founder, Demos Shakarian . Charles and family were very active in the Presbyterian church, where Charles served as an elder and later
Episcopal rector. Dennis Bennett of Ballard, WA . as well as a group of local businessmen, Charles came into a much deeper relationship with Christ, experiencing the empowering work of the Holy Spirit. It was that change that caused his feet to trod the soil of many nations while sharing his testimony and ministering to the personal needs, sometime in large assemblies, often one on one. He was also a Gideon. In addition to his involvement in the local community, Charles has, for over three decades, been a part of an international organization of business and professional men who have carried the gospel to many of the unchurched peoples of the world. That work has taken him into most of the countries of Eastern Europe with emphasis on Albania, Hungary, Russia, Ukraine and the three Baltic States. He and his wife Lynn resided in Ozark.
He was preceded in death by his parents, Charles &Frieda Fuller, his wife,Wilma Louise and his half-sister, Frances Northcutt. He is survived by his wife, M. Lynn Fuller, of the home, his three sons” Dr. Michael J. Fuller, of St. Louis, Mo., Mark S. Fuller, of Seattle, W A., and Eric C. Fuller, of Springfield, Mo., two half-sisters, Betty Butts and Barbara Robinson of Springdale, AR, two half-brothers, Raymond Fuller and Eugene Fuller of Springdale, AR, and six grandchildren, Amira Fuller of St Louis, Hannah and Graham Fuller of Seattle, Evan Fuller, Gwynna Fuller and Collen Fuller of Springfield, Mo and six step-grandchildren, Stephanie Herrera, Nicholas Herrera, Junior Herrera and Alyssa Herrera, all of Ozark, Mo, and Rebecca Hay and Joshua Hay of Columbus, Ohio, in addition to many nieces and nephews.
Charles loved life, yet had no fear of death. One of his favorite verses was 2 Tim. 1-12, “I know in whom I have believed and am fully persuaded that He is able to keep that which I have committed unto Him against that day. RIP