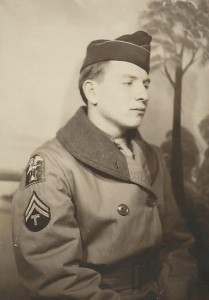 Mr. Charles Conway Tharp, age 93, of Springfield, MO departed this life to be with God in His eternal home on May 1st, 2015. The wonderful staff at Elfindale Manor and Hospice Compassus lovingly cared for Charles during his final days.

He served in the United States Army from September 19, 1942 through November 12, 1945in the Pacific Theatre during WWII.

He graduated from Southwest Missouri State College May 19th, 1948 with a Bachelor of Science Degree in Education. He had earned a BA and a Master of Science degree at the University of Illinois February 11, 1951. He retired from the Southern Illinois University at Carbondale, and then moved to St. Louis and then back to Springfield in 2014. Charles has been attending All Saints Anglican Church in Galloway.

A funeral service will be at 10:00 a.m. Monday, May 4, 2015 at All Saints Anglican Church in Galloway. Burial will be at Missouri Veterans Cemetery Springfield, MO with full military honors.