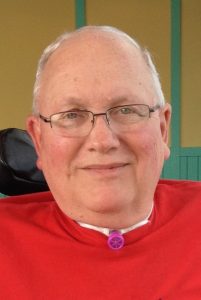 Charles Lutz Dunn, Jr. passed away suddenly in his home on August 28, 2016. He was born July 23, 1946 in Cape Girardeau, MO, to Charles Lutz and Nellene Triplett Dunn.
Charlie grew up in Charleston, MO, Cape Girardeau, and graduated from Poplar Bluff High School before moving with the family to Springfield, MO in 1966. He worked for Litton Industries for 40 years before retiring. He is survived by the love of his life, Mary Jane Elder who he married on November 26, 1988. They had a wonderful life together, working in their garden, fishing and hunting, going on trips and cruises, and hosting many family and friend BBQ’s on their back porch. He was a member of Campbell United Methodist Church.
He is also survived by his father, Charles, sisters, Susan Fink (Roger), Sally Matthews, Sarah Cowen (Jerry), brother and sister-in-law Larry and Lucy Stillwell, mother-in-law, Margaret Elder, and several nieces and nephews and great nieces and nephews. He was preceded in death by his mother and father-in-law, Maurice Edward Elder.
He was an inspiration to all who knew him. He lived life gracefully as a wheelchair bound polio survivor, which did not stop his ability to live life to its fullest. Mary Jane was not only his wife she was his best friend and caregiver, especially during the last four years when post-polio symptoms returned. She is a Godsend to his family and an angel here on earth.
A memorial celebration of life will be September 1, at Campbell United Methodist Church, with visitation at 10am and service at 11am. In lieu of flowers a memorial contribution may be made to Campbell UMC, 1747 E. Republic Rd, Springfield, MO 65804. Arrangements have been entrusted to Greenlawn Funeral Home South.