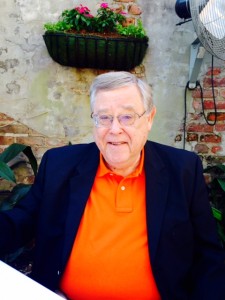 A Celebration of Life Service for Charles Philip Dawson age 67 of Hollister, Missouri will be held at 1:00 PM, Wednesday, December 30, 2015 at Greenlawn Funeral Home in Branson with David Hampton and Magda Holloway officiating. Arrangements and cremation were under the direction of Greenlawn Funeral Home in Branson.
He passed away December 22, 2015 at his home in Hollister, Missouri.
Charles was born on July 6, 1948 in Tulsa, Oklahoma the son of Sidney Earl and Ada Juanima Anderson Dawson. He was a retired from Koates Field Service as a Legal Abstractor-Right of Way Agent and had been a resident of the area since 2007 moving from Olathe, Kansas. He was a member of the Grace Methodist Church in Olathe, Kansas.
Survivors are his wife; Patricia McIntyre Dawson of the home in Hollister. Two children: Matthew Dawson (Jayma) of Olathe, Kansas and Kathryn Dawson of Shawnee, Kansas. Three step-children; Richard Holloway (Magda) of Sanford, North Carolina, Jeanie Poindexter (E. John) of Raleigh, North Carolina and B. Tanner De la Pena (Nicole) of Tampa, Florida. One brother, James Robert Dawson of Tulsa, Oklahoma, one sister, Judith Ann Peterson (Ronald) of Tulsa, Oklahoma and nine grandchildren. He was preceded in death by his parents, two brothers, Sidney Earl Dawson, Jr and Donald Lee Dawson.