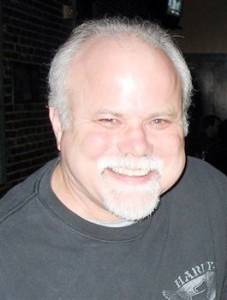 He was born October 23, 1956 in New Orleans, Louisiana, to Vernon G. and Bonnie L. (Harmer) Smith.
In 1983, Charlie married Dana Brown in Cabool, and to this union one son was born. On May 31, 2008, he married Eve Chaney in Eureka Springs, Arkansas.
He worked at Prime Inc., Springfield, in the road assist department for 14 years, serving the opposite side of the table after 26 years of trucking himself.
Charlie went through all levels of scouting and attained the highest possible award, Eagle Scout. He attended Cabool High School in Cabool, Missouri, and proudly graduated with the Class of 1974.
Charlie loved riding motorcycles and enjoyed many trips with his friends. Of course, a popular destination was Sturgis, South Dakota, and he attended several rallies there. He was gifted with a phenomenal memory, which served him well when talking to truckers on the road during his job. He was a super “tinkerer” and could take apart anything and put it back together. He was well known as a great storyteller and family and friends loved to listen to him “spin a tale.”
He was preceded in death by his parents.
He is survived by his spouse, Eve Smith; his son, Kelsey Smith of Lebanon, Indiana; two sisters, Connie (Fred) Bacorn of Ava, Missouri, and Cheryl (Dan) Simms of Hartsville, South Carolina; and one brother, Craig Smith of Sacramento, California. He is also survived by four nephews, Drew, Liam, Philip, and Mac; stepsons, Andrew and Dustin; step-grandchildren, Eliese, Madilynn, Lilah, Isaiah and Aiden; brother-in-law, Robert; and sisters-in-law, Sharon, Sharoll and Leeila, plus many cousins, and an abundance of friends.
In lieu of flowers, memorials may be made to the Cystic Fibrosis Foundation, P.O. Box 52074, Phoenix, AZ 85072.
A celebration of the life of Charles V. Smith will be held on Saturday, September 12, at 2:00 p.m. in Cabool United Methodist Church.