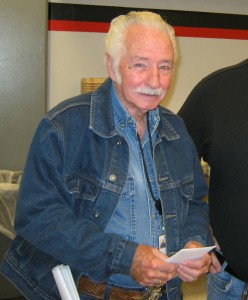 “Soon my life as a hunter will be done. Oh what a time I’ve had, what fun.” Charlie Cameron, May 10, 2003
Charlie Cameron was born on October 30, 1930, in Springfield, Missouri, and went to his heavenly home on March 16, 2015, after a long battle with Alzheimer’s. Prior to his death he was surrounded by his close family, whom he held dearest to his heart. He was preceded in death by his mother Roxie Hicks and his brother Lucky Cameron.
Early in his life, Charlie served in the United States Marine Corps. He was known as “Rebel” in a motorcycle club, also in his early years. At the age of 23 he married the love of his life and soul mate, Sugar-Babe. This began a wonderful 61 years together filled with much happiness and many adventures. He gave his life to the Lord on Father’s Day, June 17, 1979.
He was passionate about his hunting, fishing and knife-making, all passions that he passed on as legacies to his children and grandchildren, whom he cherished deeply and enjoyed spending time with. He would pray daily to, “hit what I shoot at; get my turkeys and deer and small game and fish. The boys too!”
He worked for and retired from Lily Tulip after 43 years. He also gave 33 years of volunteer service as Chaplain of the Greene County Jail where he was known as “The Rev”. After he left this post, the jail chapel was dedicated to him and named “Reverend Charlie Cameron Chapel”. During his illness, he was visited by several employees of the jail and they all made it known that he was missed terribly by the entire staff that knew him.
He is survived by his wife, Carolyn Cameron (Sugar-Babe); his son, Mark and wife Tammy; son Mike and wife Char; 9 grandchildren (Erica, Charece, Brandon, Julie, Erich, Daniel, Derek, Jessica and Michael) and 11 great grandchildren (Shane, Kristian, Chase, Dylan, Layten, Ashley, Jocelyn, Kaydence, Abbiegayle, Cayera and Gabriella), several nieces and nephews.
He will be in our hearts forever and not a day will go by that we will not think of him.
The world will not be the same without Charlie/Dad/Papaw.
Graveside services will be Friday, March 20, 2015 at 1:00pm in Robberson Prairie Cemetery.