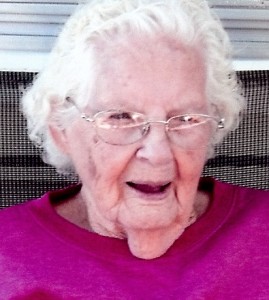 Chestine Ellen Ahart, age 92, of Bolivar, MO, passed away Tuesday, March 10, 2015, at Citizens Memorial Hospital. She was born October 9, 1922, in Greene County, MO, to Lester and Eula (Smith) Mincks. She was a member of the Mt Etna Baptist Church. She was united in marriage April 7, 1939, to Bradford “Brad” Ahart, and to this union five children were born.
She was preceded in death by her parents; her husband Bradford “Brad” Ahart; two sons in-law: Joe and Sidney Payne; two brothers: Leonard and Lloyd Mincks; and two sisters: Bertha Jarvis, and Rose Kirby.
She is survived by five children: Betty Payne of Bolivar, MO, Georgia Gaddy and husband Nyle of Fair Play, MO, Jerry Ahart and wife Edith of Lebanon, MO, William Ahart and wife Donna of Bolivar, MO, Helen Payne of Bolivar, MO; 16 grandchildren, 27 great grandchildren, and 13 great great grandchildren; eight brothers: Willard Mincks of Bolivar, MO, Paul Mincks and wife Janice of Flemington, MO, Cheslie Mincks of Clevland, MO, Leslie Mincks of Clevland, MO, Boyd Mincks, LJ Mincks, Kenneth Mincks and wife Sue, and Bill Mincks and wife Emma all of Bolivar, MO; one sister Ruth Neal of Bolivar, MO; a sister in-law Shirley Mincks of Clevland, MO; as well as a host of other relatives and friends.
Funeral services will be held at 2:00 PM Saturday, March 14, 2015, at Pitts Chapel with Rev. Neil Graham officiating. Burial will follow at Payne Cemetery. Visitation will be held from 6:00 to 8:00 PM Friday, March 13, 2015, in the funeral home. Pallbearers will be Joe Dale Payne, Jason Gaddy, Tommy Ahart, Gene Ahart, Kelly Ahart, Jamie Payne, and Tony Hill. Honorary pallbearers: Danny Dalton, Jimmy Wilson, Leallen Lockhart, Jeff Case, Paul McNeil, Roger Cook, and Jared Hendrickson. Memorial contributions may be made to: Gideon’s Bible’s, or to the family. Online condolences may be made at: www.greenlawnfuneralhome.com. Arrangements have been entrusted to Pitts Chapel Bolivar, MO.