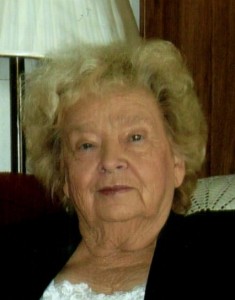 Claranda E. (Stokes)(Rhoten)(Shore) Hudson
Mrs. Claranda Hudson passed away on January 28, 2015 in Springfield, MO. She was born in Springfield, MO on April 27, 1927 to Claude and Rachel Stokes. On May 20, 1943 she united in marriage to Carl V. Rhoten and they had three children, Carl, Marie, and Irma.
She was preceded in death by her parents, husbands Carl V. Rhoten and Raymond L. Shore, son Carl D. Rhoten, four brothers James and Paul Stokes and two that died at birth, one sister Claudina Stokes. She is survived by husband Glenn Hudson, daughter-in-law Ernestine Rhoten, daughters Marie and Danny McMurray, and Irma and David Delzell. Six grandchildren, Kevin and Judy Rhoten, Kendra and Stacy Holden, Michelle and Bob Bramel, Steven and Melissa McMurray, Lavonna and Kent Franklin, and Eric Delzell, twelve great-grandchildren, step-children Kevin, Linda, Sharon, Wayne and their spouses and children, sister Barbara Hildreth, brothers Bill, Tom and Lela, John and Sally, and Jerry Stokes, four step-children, and a host of nieces and nephews.
The family wishes to give a special thanks to Hospice workers Melody and Susanne for the love and care they provided.
A graveside service will be held at 11:00am, Monday, February 2, 2015 at Brighton Cemetery in Brighton, MO. No visitation will be held. Memorial contributions may be made in Claranda’s memory to St Jude’s Children Hospital.
Friends and family may sign the guest book at www.greenlawnfuneralhomes.com