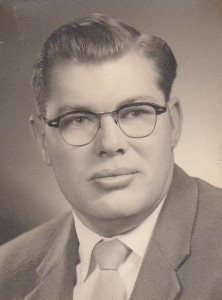 Clarence A. Passmore, age 81, of Springfield, MO, passed away Monday, December 15, 2014 at Marantha Lodge. He was born July 31, 1933, in Ralls County, MO, to Clarence and Idabelle (Dodd) Passmore. He was a member of the Praise Assembly Of God Church. He served in the U.S. United States Air Force during the Korean Conflict.
He was preceded in death by his parents, a brother: Russell Lorraine Passmore, a sister Beverly Ann Passmore, and his step-mother: Dora Mae Passmore. He is survived by his wife Dianne L. Passmore, two sons: Jay William Passmore, and his wife,Debra Fair Grove, and Brian Keith Rein Passmore, and his wife Cheryl, Springdale, AR Five Grandchildren: Sarah, Tammy, Amber, Nicole, and Jonathan, 10-great-grandchildren, two brothers: Charles Raymond Lowe, and his wife Bonnie, Valley Center, CA Larry Passmore, and his wife Pauline St. Louis, MO, two sisters: Esther Darlene Anderson, Independence, MO and Virginia Semkin and her husband George, New London, MO.
Funeral services will be held at 10:00 a.m., Saturday, December 20, 2014, at Greenlawn Funeral Home North, Springfield, MO with Rev. Ken Fent officiating. Burial with Military Rites will be held in Greenlawn Memorial Gardens, Springfield, MO. Visitation will be held from 6 to 8 p.m. on Friday. Memorial contributions, in lieu of flowers may be made to Praise Assembly Of God Church. Services have been entrusted to Greenlawn Funeral Home North, Springfield, MO. Online condolences may be made at www.greenlawnfuneralhome.com.