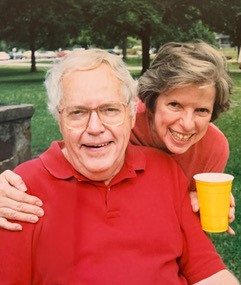 Clifford D. Campbell passed away peacefully at home in the presence of his loving family on Feb. 12, 2021. Clifford was born on May 12, 1929 in Harrison, Ark. to Clifford D. and Argie Pierce Campbell. The family moved to Springfield, MO. where he attended Rountree Elementary, Springfield Senior High and Southwest Missouri State College. He served in an engineering battalion in the Korean War.
He and his wife Jacquelyn recently celebrated 70 happy years of marriage. They raised four children, Gwen (Colin), Ted, Randy (Gail), and Scott (Carolyn), four grandchildren, Emily (Brian Shue), William, Claudia and Sean, and one great grandchild, Luke Shue. He was preceded in death by his parents and his sister Carolyn Knight of Friendswood, Texas.
At a young age Clifford helped out at his father’s restaurant, The Pig ‘N Bun. As an adult he worked for the Paul Mueller Co., then spent thirty years until his retirement with Southern Materials Co.
Clifford enjoyed early jazz recordings, old movies, playing drums, traveling overseas, creating his own cartoon illustrations and buying and selling fine antiques and paintings. Within his family he was known for his “bear bites”, “Dutch rubs” and “mice milking”.
The family would like to extend a special thanks to the caring nurses of Cox Health Hospice.
In lieu of flowers, donations may be made to C.A.R.E. Animal Rescue of Springfield. A memorial service is to be held at a later date. Online condolences can be left at greenlawnfuneralhome.com.