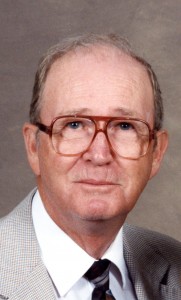 Clifton Bratcher of Nixa, Missouri, 95 years of age, passed away June 11, 2015 at Mercy Hospital in Springfield, Missouri. Clifton was born in Elijah, Missouri on March 10, 1920. He married Wanda Ballard June 5, 1941. He and Wanda had two children, one daughter and one son.
He is survived by his wife, Wanda; his daughter, Barbara Kutchko of Highlandville, MO; his son, Dan Bratcher of Nixa, MO; eight grandchildren and their spouses; and twelve great-grandchildren.
Clifton is preceded in death by his father, Paul Bratcher Sr.; his mother, Esther Pugh; his brothers, Clyde and Paul Jr.; his sister, Chlora Collins; and grandson, Eric Williams.
Clif worked at Biederman’s Furniture for many years on Walnut St., then Glenstone Ave. in Springfield, Missouri until their closing, which prompted him to enter the insurance field. He served as an agent for Christian Fidelity for 27 years.
He was active in the Baptist church where Clif served on the deacon board of several different churches. Clifton was an avid golfer, and also enjoyed fishing, bowling, billiards, and baseball.
A memorial visitation will be held 1:00 to 2:00 p.m. Monday, June 15, 2015 at Greenlawn Funeral Home South, Springfield, Missouri, with a graveside service at 2:30 p.m. at Rivermont Memorial Gardens, Springfield, Missouri.