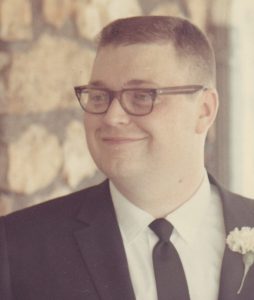 Clyde Frank Gilmore Jr., age 75, of Springfield, MO, passed away in his home. He was born February 9, 1941, in Greene County, MO, to Clyde (Frisco Railroad Conductor) and Martha (McEvilly) Gilmore SR.. He graduated from Strafford High School, in 1959 and later received his Masters Degree in Communications, from S.M.S. Frank worked 10 years for Mickey Owen, as a Greene County Sheriff’s Deputy. Frank made many friends there, including Mickey Owen, D.C. Dean, Freddy Cochrum, Darrel Flanagan and Les Ridenhour. He also served as sheriff of Conway and Clever MO. Frank was a former minister at Pitts Chapel and Pythian Avenue Methodist Churches. Frank was a lifelong ham radio operator, working several years for the ARRL (American Radio Relay League) and spent several years teaching communications at SMS. In the 1960’s, Harry Reid, of Reid Radio set Frank up with his own shop on Brower Street , to buy, sell, and trade ham equipment. Frank had many friends in the ham radio hobby; Harry Reid, Bill & Linda Dye, Dorrell Schank (The Judge), Joe Hill, Don Mullins, and one of Frank’s great friends from SMS, a fellow professor, Harry Cook, and many others. Frank’s Ham Radio call letters were KOJPJ(Kilowatt-Zero-Japan-Pacific-Japan).
He was preceded in death by his parents,and his loving wife, Barbara (Nickle) Gilmore, who passed away on Nov. 17, 1975. He is survived by his two younger brothers; Lane David Gilmore, Oklahoma City, Oklahoma, and Larry Michael Gilmore, ( retired Frisco/BNSF conductor) and his wife Kristine Gilmore, Springfield, MO, and his four nieces: Stacey, Jamie, Lisa and Kayla Gilmore.
No services are planned at this time, cremation is under the direction of Greenlawn Funeral Home North. In lieu of flowers Memorial contributions may be made to Mercy Hospice. Services have been entrusted to Greenlawn Funeral Home North, Springfield, MO. Online condolences may be made at www.greenlawnfuneralhome.com.