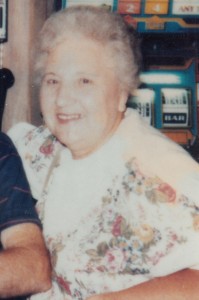 Cora Mae Henry, age 87, of Springfield, MO, passed away Friday, March 13, 2015 at Ozark Riverview Manor. She was born October 18, 1927, in Glenwood Springs, CO, to Charles and Beuna (Carter) Case. She graduated from Squaw Creek High School in Colorado. She was united in marriage to Edgar Eugene Henry on July 12, 1944 in San Antonio, TX. Cora always enjoyed a good game of Bingo, where she usually was a winner.
She was preceded in death by her loving husband of sixty years Edgar Eugene Henry; her parents, Charles and Beuna Case; one son, Billy Eugene Henry; one daughter, Mary Lemons; and three brothers, Kenneth Case, Sonny Case, and Charles Case . She is survived by her three loving children, Linda Mansker, Ozark, MO, Eddie Henry, Springfied, MO, and Dorothy Applegate, Nixa, MO; fifteen grandchildren; nine great-grandchildren; two brothers, Buster Case, Eagle CO and Leonard Case, San Diego, CA; two sisters, Katy Case, Boulder, CO and Barbara Jean Case, the state of Wyoming; and a host of family and friends.
Graveside services will be held at 3:00 p.m., Monday, March 16, 2015, at Greenlawn Memorial Gardens, Springfield, MO. Visitation will be held from 2-4 p.m. on Sunday, March 15, 2015 at Greenlawn Funeral Home North. Memorial contributions may be made to the American Cancer Society. Services have been entrusted to Greenlawn Funeral Home North, Springfield, MO.